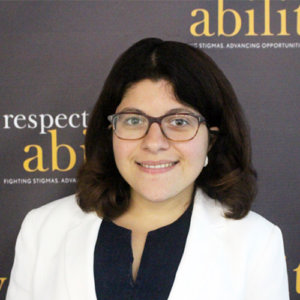 Zein Al Maha Oweis (Zee) was a Jordanian Communications Apprentice in RespectAbility’s National Leadership Program. She joined the team in the fall of 2017 to use and build her skills to help serve people with disabilities through her knowledge of communications and journalism.

Oweis is visually impaired and always has been intrigued by how powerful one’s voice can be used when telling a story and raising awareness. During her teenage years, she would listen to the daily news and was captivated by the vocal techniques used when broadcasting the news. She uses her oral and aural skills to help her navigate the world around her. Maha also is a competitive Ballroom and Latin dancer for eight years and has competed in Italy and Monte Carlo.

In 2016, Oweis graduated as valedictorian from Regent’s University London where she obtained her Bachelor’s Degree in Media Communications. She recently graduated with a Master’s Degree in Broadcast Journalism from American University. She is passionate about topics related to persons with disabilities which is evident in her journalism work. Maha voiced over New Technology Rolls Out For Persons With Disabilities, a news package assignment highlighting new technology for persons with disabilities used during the 2016 election season.