Washington, June 20 – As the White House and lawmakers on both sides of the aisle consider criminal justice reform, a new white paper, “Disability and Criminal Justice Reform: Keys to Success” was released today by the nonprofit disability organization, RespectAbility. The report uses public data previously available but never before assembled and analyzed. It makes a series of recommendations to reduce the school-to-prison pipeline for people with disabilities, to enable incarcerated individuals with disabilities to receive the literacy and life skills they will need when they exit the justice system as well as have access to their human rights, and to help returning citizens become productive members of their communities. 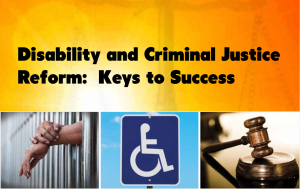 According to the Bureau of Justice Statistics, 32 percent of federal prisoners and 40 percent of people in jail have at least one disability. Using such sources and limited data, RespectAbility estimates that more than 750,000 people with disabilities are behind bars in America. This includes 140,000 who are blind or have vision loss, approximately the same number who are deaf or have significant hearing impairments and more than 200,000 who have mobility issues. The largest group, which includes more than half a million people, has cognitive impairments.

“We need to acknowledge and accommodate for the full range and large numbers of people with diverse disabilities who are incarcerated as well,” said Janie Jeffers of Jeffers and Associates, who is one of the Disability and Criminal Justice Reform report’s authors and an expert on crime and prisons. “Failure to adequately and appropriately deal with these disability issues expands the cycle of failure, crime and recidivism.”

The authors, who include Jeffers as well as returning citizen Eddie Ellis Jr. and RespectAbility’s Jennifer Laszlo Mizrahi and Philip Pauli, argue that for criminal justice reform to succeed, every stage and effort must take into account the specific realities and needs of people with disabilities who are in the school-to-prison pipeline, the justice system or returning to our communities.

For decades, stories about criminal justice have focused on race and poverty alone. But this story misses the lens of what happens to people with disabilities whose parents do not have the resources to ensure they have correct disability diagnoses, IEPs and accommodations.

The majority of people behind bars is functionally illiterate and did not complete high school. Many have repeatedly been victims of assault, sexual violence, bullying and low expectations – experiences that can lead to committing crimes.

Once individuals with a disability are in the system, they face significant problems including access to counsel, a lack of accommodations, complex rules, systematic abuse and solitary confinement. Many are abused behind bars. For example, people who are deaf or blind are put in solitary for years as an “accommodation;” however, evidence shows that this can cause them to have significant mental health problems.

Eddie B. Ellis Jr. received a dyslexia diagnosis as a child but did not receive the support he needed in school, leading to him dropping out and engaging in crime. While incarcerated, Ellis was never given accommodations or treatment for his dyslexia or Epilepsy.

“I remember having my first seizure in Youngstown, Ohio, in 1997 after being jumped on by some correctional officers and from that time until I was released, I was never given any medication or test to see what was happening to me,” said Ellis, who spent 10 years in solitary confinement for manslaughter. “Years before, some fellow inmates told me that I would be talking to them and them go into a daze-like state, which I found out later could have been signs of Epilepsy. I had a bad seizure around 2009, and I was taken to the hospital and was told that I do have Epilepsy and they see it in my frontal lobe.”

Upon release, Ellis found ways to educate himself and is now a productive member of the community serving as a mentor to other returning citizens in the Washington, D.C., area.

While 95 percent of incarcerated people will be released, the programs and communities waiting for them are not yet prepared to provide appropriate supports. Without appropriate support, two-thirds will end up being re-incarcerated, with new crime victims in their wake. The majority of the stories do not end with success like Ellis.

The White House has been pushing for criminal justice reform from reducing recidivism to meaningful sentencing reform. White House Senior Advisor Valerie Jarrett will be discussing the issue with America’s mayors at their upcoming annual meeting this weekend. They will be exploring best practices that mayors can use in their cities.

The Coalition for Public Safety – a bipartisan group from left to right that includes the ACLU, Americans for Tax Reform, Center for American Progress, Faith and Freedom Coalition, Freedom Works, The Leadership Conference Education Fund, NAACP and Right on Crime – is addressing what they call the U.S.’s “over-criminalization” and “over-incarceration” problem. More than 60 percent of the people in prison are now racial and ethnic minorities, according to the coalition.

But while the Senate is attempting to pass sweeping criminal justice reforms, not everyone is on board. At a speech to the Hudson Institute last week, Sen. Tom Cotton said the U.S. is suffering from an “under-incarceration problem.”

As groups push for reform with support from the White House and many in Congress, RespectAbility is working to ensure that people with disabilities are not left out of the discussion.

“We are deeply concerned that so many Americans with disabilities, especially those of color, are in the criminal justice system and how many victims this system creates on all sides,” Pauli said. “Only when the rights and realities of people with disabilities are recognized and addressed will they be able to succeed in our communities. People of color and others from vulnerable populations are especially at risk because of the intersecting and compounding effects of racism, ableism and other forms of discrimination. Criminal justice reform will not succeed unless and until disability is addressed in all stages of the criminal justice system from early intervention to reentry and reintegration.”

Next: Best Practices in Action: Youth Transitions and Employment Outcomes in Iowa