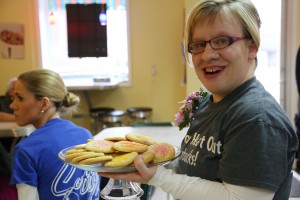 In a town that has seen several coffee shops go out of business after only two years, Em’s Coffee Co. continues to be a strong, vibrant business since its opening six years ago.  Hillman, who arrives at 6 a.m. to make the coffee and open her business, is seriously committed to her work, her employees, and her customers.

Hillman is well known in Iowa for leaving a segregated workshop and becoming a business owner with the support of her family, the Iowa Vocational Rehabilitation Services’ Self-Employment Program and other agencies. Born with a congenital condition causing a lack of nerve tissue connecting the left and right side of her brain, her parents were given little hope that she would learn to walk or talk, much less that she would ever be gainfully employed.

After graduating high school in 2007, Hillman worked in a sheltered workshop earning $2.00 an hour folding clothes – far less than the minimum wage. The job was just not right for people-oriented Hillman. Now she chats happily with customers as she takes their orders, and has a lot more earning power. 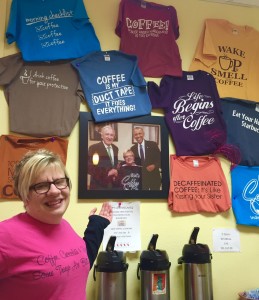 Em Hillman shows off her picture with President Barack Obama

“Hillman serves as a role model for other young women with disabilities looking to become business owners around the country,” RespectAbility President Jennifer Laszlo Mizrahi said. “Partnerships with state vocational rehabilitation services and proper training are the building blocks for people with disabilities to create successful business models that benefit their entire communities.”

Em’s coffee company serves as the community-gathering place for citizens of Independence, where many local organizations host their events and monthly meetings.

Customer Glen Meskimen comes to the coffee shop daily to work on his laptop for his consulting company. He always orders the same thing – a white chocolate mocha and a freshly baked roll.

“In the morning, if I’m not here, Emilea calls to see where I am and make sure I’m OK,” says Meskimen. “I’m lucky to have Em and the staff help me all day long. It’s a great opportunity for Em, and it’s great for me.

Hillman and her family remodeled the building which houses Em’s Coffee Co. – recovering chairs, painting walls and installing wireless Internet access. Hillman also attended barista training to learn the language of coffee and practiced with flash cards with photos and simplified instructions to remember the details of various coffee products, recipes and temperatures. 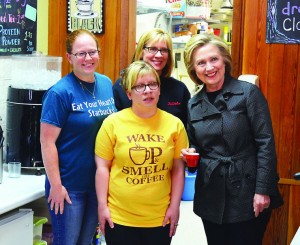 Em’s also is known as the place where local, state, and national candidates and elected officials from both parties have come to meet voters and constituents. Iowa Lt. Gov. Patty Judge visited when she ran for re-election in 2010. U.S. Sen. Joni Ernst has visited too, and former U.S. Sen. Tom Harkin has visited on multiple occasions.

Presidential candidate Hillary Clinton most recently visited in May.

“Sen. Harkin told me if I was near Independence, I should come here and meet Em,” said Clinton. 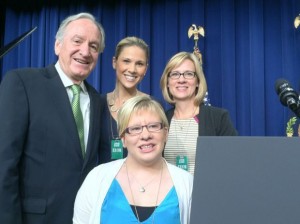 To accommodate her disability, Hillman and her family have developed a color code using puff paint for the switches and knobs on the espresso machine, an idea that originated during her barista training from Espresso Partners. Her family took that idea and applied it to other areas of the coffee such such as the smoothie machine. These accommodations originated by experts in making coffee, not experts in human services, showing that experts in the field can come up with innovative accommodations that can help all people.

All prices are set at 25-cent increments and include sales taxes to make collecting money and making change easier. Hillman also uses her iPad as the cash register and uses customized pictures of the items as buttons to ring up customers.

Hillman and her family are proud that, with some assistance, she has been able to become a taxpaying citizen and a successful business owner and taxpayer. 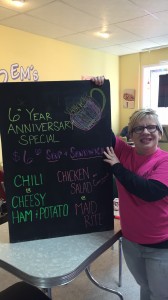 Two grants from the Iowa Vocational Rehabilitation Services Self-Employment Program paid for Hillman’s Barista School training in Minneapolis and for some equipment and business services for the coffee shop. She also received assistance from Iowa’s Work Incentive Planning and Assistance Program, Medicaid Home and Community Based Services Waiver, and Griffin-Hammis and Associates. A grant from the U.S. Department of Agriculture helped fund operating costs for the first year.

“Entrepreneurship is a profound part of living the American Dream,” Mizrahi said. “Improving and expanding grants that train people with disabilities to start their own business is something the U.S. Department of Labor and the U.S. Small Business Administration can do as a part of this plan. Likewise, expanding affirmative action and anti-discrimination protections for disability-owned businesses also are important steps that can help create employment opportunities.”

Next: How You Can Make a Difference for People with Disabilities in the 2016 Presidential Campaign