Washington, D.C. – RespectAbility is delighted to share with you the fact that the jobs bill for people with disabilities (WIOA) passed the U.S. House of Representatives overwhelmingly today. This comes on the heals of a 95-3 vote for the bill in the U.S. Senate. It is expected that the WIOA bill will be signed into law soon. Many consider it the most important disability legislation since the groundbreaking Americans with Disabilities Act was passed in 1990.

The vote comes almost exactly one year after the founding of RespectAbilityUSA.org, a non-profit organization working to empower Americans with disabilities to achieve the American Dream. Donn Weinberg, Founding Chair of RespectAbilityUSA.org, and its President/CEO Jennifer Laszlo Mizrahi, then introduced the nascent national, non-profit, non-partisan organization whose mission is to: 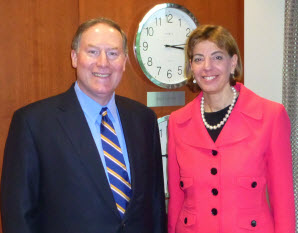 RespectAbilityUSA works to educate, sensitize and engage Americans to focus on what people with disabilities can do, rather than on what they cannot. RespectAbilityUSA thereby seeks — steadily, and in a practical way — to help increase the number and percentage of Americans with disabilities who engage in gainful employment, start and sustain their own businesses, lift themselves into the middle class, and participate in their communities.

Jennifer Laszlo Mizrahi, President/CEO of RespectabilityUSA, is a veteran political and policy advocate whose dyslexia kept her from effectively reading or writing until she was 12. She also knows what it means to be the proud parent of a child with multiple disabilities. Said Mizrahi, “We are deeply grateful to the people who have helped us in our work this first year and look forward to a strong future for people with disabilities. There is a political debate about solving immigration issues in America because people who care about this important topic have groups to give them a voice in Washington. The recent changes on marriage equality for the LBGT community is also an outcome of the Human Rights Campaign and others. For decades approximately 70% of working age Americans with disabilities have been outside the work force and without a strong, coordinated and bipartisan voice. Thus we are delighted that the 56 million of us with disabilities in America can stand up for the same rights and opportunities as every other citizen. Polls show that most citizens with disabilities who are collecting government benefits want to work, but significant obstacles inhibit them from gaining employment.”

In its first year RespectAbilityUSA met 1-1 with 33 of America’s governors. This week RespectAbility will again meet with numerous governors on site at the National Governors Association meeting. RespectAbility is working to inspire smart public-private partnerships that can save American taxpayers billions of dollars a year as citizens with disabilities get what they want — real jobs for real pay.

RespectAbilityUSA is under no illusions that positive change will be easy. At the launch a year ago, said Weinberg, “Change will require strong bipartisan cooperation — not something in ample supply today. It will also need public-private partnerships. We will reach out to companies, non-profits, the faith community, philanthropists and media alike.”

Said Mizrahi, “The WIOA bill, which passed today, is completely bipartisan and will be one key piece of a solutions puzzle, but we have a long way to go before people with disabilities are seen for the ABILITIES they have.”

Shelley Cohen is the group’s secretary, and Thomas “Doc” Sweitzer and Louis Zweig also serve on the board with Weinberg, Cohen and Mizrahi. Members of the Board of Advisors are disability experts Kelly Buckland, Donna Meltzer, Steve Tingus, Mark Johnson and Steve Eidelman. Organized as a District of Columbia non-profit corporation, RespectAbilityUSA is waiting for final IRS approval. Until final approval, RespectAbilityUSA is operating as a project of the Autism-Society of America, which receives tax-deductible contributions on its behalf. RespectAbility recently received a $100,000 matching grant from the Milbank Foundation so all new donations will be matched one-to-one. Donations are needed and may be given online.

“Today, every family has, in some way, been touched by a disability” said Weinberg. “The growing ranks of children who have been diagnosed with Autism, the veterans returning from foreign wars without limbs or with PTSD, or people with Down Syndrome – these and all people have value and can contribute to the productivity of our great nation.”