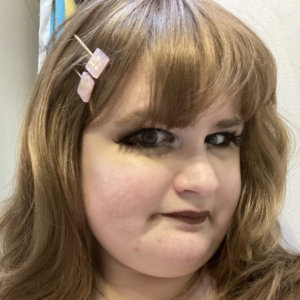 Craig received her undergraduate degree in History and Communication Studies from Hollins University in 2015 and focused on the intersections of antisemitism and nationalism in modern European history. Currently, she is in her final year at Lindenwood University’s MFA program and is set to graduate in December 2022 with a Master of Fine Arts in Writing with a concentration in Creative Non-Fiction.

Professionally, she has worked in a variety of institutions from the United States Holocaust Memorial Museum in Washington, D.C. to the National Army Museum in London as an archivist, librarian, and general all-around history nerd. That is, until she twirled stage left into the dance competition world as a road warrior with StarQuest International. Finally, she landed in the world of personal growth and leadership and worked at the entrepreneurial start up The Legacy of You in New York City.

As an autistic individual with POTS Syndrome, a disability that often requires the use of a wheelchair due to fainting, tachycardia, and fatigue, the work of RespectAbility is something that is very near and dear to Craig’s heart. Forced to give up her work in the dance world due to her condition, she believes passionately in making the working world more accessible for people with disabilities so that they can live their dreams.

Craig is known for her love of gyaru fashion, and cosplaying characters from franchises such as Stranger Things, Danganronpa, and Beetlejuice. You can usually find her cuddling with her ten-month-old kitten, Komaru, and subjecting everyone to passionate monologues about Arcane lore.