According to Statistics Canada, 22% of Canadians live with a disability. It’s a sure thing that someone you work with has a disability. Knowing that, are we creating workspaces that allow for accommodations without our colleagues having to ask or disclose their disability publicly? Are we inadvertently using ableist thinking? How can we make the work environment welcoming to all?

Jennifer Laszlo Mizrahi, co-founder/director of the Mizrahi Family Charitable Fund, is a long-time serial innovator, and Jewish leader. She founded the disability-led nonprofit RespectAbility, which fights stigmas and advances opportunities so people with disabilities can fully participate in all aspects of community. In the last year, RespectAbility consulted on more than 200 entertainment media productions and provided testimony in every state on disability issues.

Join Sinai Temple and RespectAbility for a conversation about Jewish disability inclusion! Hear from filmmaker and actor Aaron Wolf and poet Erika Abbott about their experiences as Jews with disabilities. Following their reflections, there was a Q&A session led by Rabbi Erez Sherman from Sinai Temple.

In February, Tzedek Box partnered with RespectAbility to focus on Disability Justice and Access. With hosts Dena Robinson and Darin Lim Yankowitz, attendees heard from leaders of RespectAbility, “a diverse, disability-led nonprofit that works to create systemic change in how society views and values people with disabilities, and that advances policies and practices that empower people with disabilities to have a better future.” RespectAbility also prioritizes accessibility in faith-based communities, with a particular focus on the Jewish community. Matan Koch, the Vice President for Workforce, Leadership, and Faith Programs was their featured guest, and Aaron Seglin was their musical guest..

Aaron Wolf, an award-winning actor, director, speaker, and activist uses his creative voice to tell stories from the heart, that entertain and matter. He is the co-founder of Howling Wolf Productions. Some of his work include the Academy Award® shortlisted film Restoring Tomorrow, and TAR, the theatrical throwback thriller that came out last year staring Wolf with Academy Award Nominees Timothy Bottoms and Graham Greene. He also has created the I AM ABLE Foundation.

Wolf drew from his personal experiences, sharing insight into his struggle to tackle the urgent topic of learning disabilities and de-stigmatize people deemed disabled. For Wolf, this is one the most critical civil rights issues currently being overlooked and misunderstood by society and he is on a quest to use his voice and work for positive change.

Learn from the team’s ASL consultants as well as Executive Producer Johanna Stein and Actress Shaylee Mansfield on how they worked together to bring about dynamic deaf characters. END_OF_DOCUMENT_TOKEN_TO_BE_REPLACED

Navigating the Entertainment industry can be a daunting and overwhelming experience for anyone. And when you’re a person with multiple underrepresented identities, disability included, the feeling of burnout can become real very quickly. This event was a conversation between RespectAbility Entertainment & News Media team members, Tatiana Lee & Lesley Hennen. They shared their experiences and tips for navigating advocacy as disabled creatives, and how to handle the inevitable burnout that comes with it. END_OF_DOCUMENT_TOKEN_TO_BE_REPLACED

When we think of diversity in the arts, do we consider the 1-in-5 people who live with a disability? Due to a lack of accessibility and stigma, artists with disabilities rarely get to take the stage to tell their own stories. This event featured a conversation with industry leaders about writing for disabled voices. END_OF_DOCUMENT_TOKEN_TO_BE_REPLACED

For many folks who are looking to start a career in the Entertainment industry, whether in development, writing, production, marketing, and everything else in between, the starting point is film school. Since the best way to improve on-screen representation of people with disabilities is to hire more disabled people in all aspects of the storytelling and filmmaking process, how can film schools ensure full accessibility for disabled students and faculty? This event was a conversation with RespectAbility Summer Lab alumni and current working Entertainment professionals, Laura Alsum, Michael Dougherty, Tyler Hoog, Andrew Reid, and Faith Strongheart. We discussed their lived experiences as disabled individuals who have navigated film school, and shared some best practices for schools to ensure accessibility for all.
END_OF_DOCUMENT_TOKEN_TO_BE_REPLACED 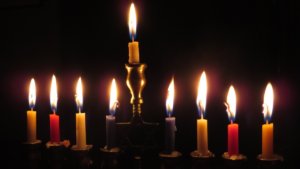 RespectAbility celebrated seven great nights of Chanukah fun (taking Friday December 3rd off for Shabbat to relax and reflect). Each night we lit candles as a virtual group. Additionally, we featured two great members of our community who shared a very short (3-5 minute) and upbeat personal story or remark about Chanukah. Celebrations included candle lighting, maybe a song, the candle lighting prayers and perhaps a little schmoozing. It was very informal. END_OF_DOCUMENT_TOKEN_TO_BE_REPLACED

At L.A. ComicCon, we hosted a panel on disability inclusion in film and television. Attendees learned how inclusion can positively impact their bottom line and stretch their marketing dollars for their feature film or television project. END_OF_DOCUMENT_TOKEN_TO_BE_REPLACED