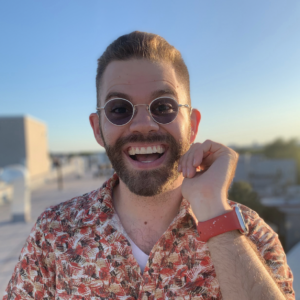 Myles Hunt is a hard of hearing and proud lifelong hearing aid-wearing visual artist based out of Brooklyn, NY. As an adoptive child with hearing loss growing up in Buffalo, NY, he was fit for his first hearing aids at the age of two. From there, with immense support from his parents and sister; he learned how to lip-read, improve his speech and slowly advocate for himself in both educational and social settings. Early on he became infatuated with Jim Henson and his famous Muppets while learning his syllables. He practiced lip-syncing to music, movies, and television shows while using the puppets that he built himself. Utilizing his love for creatures and all mediums of art, he developed over 200 characters of his own and counting. He attended Hobart and William Smith Colleges and graduated with a B.A. in Arts and Education. Exploring all art mediums and becoming certified as an elementary school teacher in New York State, he set his sights back on the Muppet world. He interned for two summers with The Jim Henson Company, where he took part in the design, creation, and performance of Jim Henson Muppets. He then went on to become a professional puppeteer with the Walt Disney Company. He has since been involved in the ed-tech space and eventually became CEO of sMyles Creative. Through his work with sMyles to date, he has devoted his efforts to creating, conceptualizing, and producing original characters for entertainment and education. Currently, he is pitching his first animated series centered around a character of his own creation named J.W., a deaf drummer who, with his rag-tag gang of diverse musicians, attempts to make it in the music scene. A paired children’s book, J.W. The Deaf Drummer showcases the character and world-building put in place to promote empathy, compassion, and the joy of the arts with friends. Such animated characters have been featured in several film and television festivals such as The Metro Film + Tv Awards, Giphy Film Fest, and Reel 13.