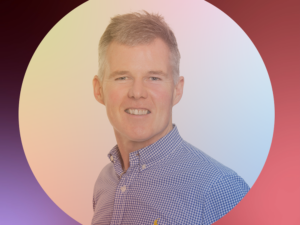 Raymond Lynch has always been an overachiever. Raised on a farm in Ireland, he worked hard and long hours in his youth. In college that same work ethic helped him to hold down multiple jobs while working towards a master’s degree in Biochemical Engineering. Upon earning his PhD, Raymond applied to a Research and Development position at P&G in Egham, England and immediately built on his achievements with a track record of delivering impact and results. He was on his way to a new role after he returned from a much-needed vacation. But his life—let alone his career—would never be the same.

In August 1998, Raymond and his wife planned a holiday to enjoy one of his favorite past times: riding motorcycles. Only three days into their journey, a car “jumped” a red traffic light and hit them head on. Raymond’s left leg was shattered, and worse yet, the next morning his wife noticed that he wasn’t making sense when talking. An emergency team was called in and in another challenging turn of events, his wife was soon after told that he was brain dead. Over the next two weeks, doctors asked Raymond’s wife to consider turning off his life support machine. She told them she could not.

Thankfully, after several months in a coma, there was evidence that his condition was improving. Doctors gave their support for Raymond to return to London via air ambulance, where, after another few weeks, he woke up. However, every minute spent unconscious results in almost 3 million brain cells dying and coming out of the coma would be yet another difficult step down an unknown path. Raymond could no longer speak. Nor could he read, write, or walk. Through enormous hard work and determination, several months later, he got out of the wheelchair. And subsequently, he decided he wanted to go back to work.

Raymond returned to the same empathetic management structure he had before the accident within P&G. With their support and understanding, he was successful in being part of the team. However, after three years, staff retirements, transitions and relocations meant that his supportive management network virtually disappeared, and he began to face workplace challenges.

He was again undeterred. Raymond began to use his experiences and the challenges he faced to educate others within P&G about disability inclusion to change the narrative and effect positive change. In 2017, Raymond was invited to join the Persons with Disabilities (PwD) network within P&G, where in quick succession over the next two years, he met key leaders, including Sam Latif, Global Accessibility Leader, and Julio Nemeth, Executive Sponsor of PwD, and delivered a brain injury awareness presentation at HQ. In 2019, he helped develop and deploy Return To Work (RTW) Accommodations for employees with brain injuries, a program that includes manager and peer training to help everyone within the company understand the intricacies of working with those with brain injuries.

Although for Raymond it has been a long and difficult road, both personally and professionally, he says: “I’m very happy to be part of a company that values my experience and is now implementing training and tools to effectively manage and support employees with a brain injury.”

After Raymond was appointed ‘Global Ambassador, Employees with Disabilities and Medical Conditions’ in August 2020 he suggested the idea of setting up support groups for various disabilities/medical conditions where people could meet on a regular basis, share coping strategies, discuss how they have partnered with managers/peers and learn from one another.

The groups began with a brain injury support group in January 2021 of 7-9 fellow employees who were known to have suffered brain injuries (concussions, strokes, falls, TBI’s, tumours). However, once the support group was announced, the number increased overnight to almost 40. Today, more than 18 months later, more than 600 employees have joined these groups in support areas such as: Brain Injury, Deaf/Hard of Hearing, Blind/Visually Impaired, Neurodivergent community, Chronic Pain, Mental Health, Multiple Sclerosis Support, Caregiver-Ageing loved ones and Cancer Support Group. One of the members recently shared, “I didn’t know I was missing a community until I had one.”

It’s important to empower individuality and uniqueness of all employees, create inclusive and accessible designs for packaging and products and expand community outreach and partnerships to make a lasting impact. Raymond Lynch demonstrates the many facets of diversity and inclusivity within P&G and helps the company live out its commitment to their employees and consumers.

As a company, P&G has learned from Raymond and other colleagues how they can better meet the needs of P&G’s employees with disabilities and foster a disability-confident culture that takes action, drive growth and create value for people with disabilities. We recognize this is a journey and each day progress is being made in creating an environment where the opportunity to contribute, grow and succeed is available to all.

In July 2022, P&G was recognized as a Best Place to Work for Disability Inclusion on the Disability Equality Index (DEI), acknowledging the inspirational leadership of our employees, and reinforcing the commitment to a more equitable world, removing bias, and creating a positive impact for all.

Learn more about P&G’s commitment to disability inclusion at their website.

Next: Hispanic People with Disabilities and Natural Disasters in Florida and Puerto Rico