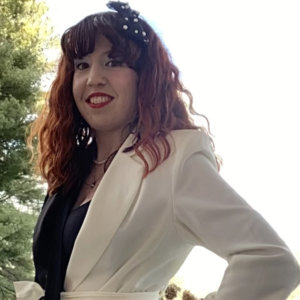 I remember many beautiful things about Philadelphia Pride 2018. Mamma Mia had come to town, and the performers were marching in the parade. Their routines were vibrant, as though the streets were a makeshift stage, and all the world was invited. In my red skinny jeans and my rainbow wing scarf, I stood on the sidelines, keeping up with their routine as best as I could. It was my first Pride in years, the previous two stolen by a combination of undiagnosed Lyme disease, and pineapple-induced anaphylaxis. With an antibiotic under my belt and a newfound freedom in my joints, I was finally free to interlace my identities: pansexual, disabled, performer at heart. By my side was a close friend from college, her best friend from Atlanta, her girlfriend, and the girlfriend’s roommate: a Jewish nonbinary disabled cat lover with a knack for poetry and a love for the word “Jawn.” For all the wonderful visuals about Philadelphia Pride 2018, the one I remember the best is the sugar rush of being side-by-side with The Roommate. Pride is always a powerful recognition, but especially so when it is celebrated with someone who stole your heart away.

It had been a couple of months since they and I first met, sitting across from each other at a sushi dinner with my friend and her girlfriend. The Roommate was hard of hearing like myself, bringing a silent understanding to the conversation from the start. Anytime I needed something repeated, they were happy to oblige, and we always made an effort to ensure the other was heard. On the way back to my friend’s apartment after dinner, that was when I first felt their hands. The part of me still wrestling with internalized ableism told myself, “it’s impossible for something to be there, you’re just imagining things, no one could ever want you.” No amount of internalized ableism, however, could change the flutters I felt when their hands met mine or the smile I couldn’t take off my face. Back at my friend’s apartment, after dinner was over, she said something that still rings clear in my mind.

“This is the most relaxed I have ever seen you around someone you like.”

Through several past loves, this friend had been there through every tear, and came prepared with a homemade anti-wrinkle solution called “tear blotter.” She had seen many heartaches, including the one from a boy I had loved for half my life. Love seemed like something that eluded me and would forever stay associated with pain as long as it was off the page. Writing a love story about someone else was easy but fathoming one for myself felt impossible. I had met a few people who left tiny sparks since the heartache of that boy who left when my PTSD got too bad. It seemed like I wouldn’t be able to feel again, though an observation from my friend gave me hope. After everything she had seen before, it left a great impression when she pointed out my relaxedness around The Roommate. Whether I could’ve fathomed a full relationship back then was unimportant. What mattered more was that it was a first step in opening my heart back up after living with so much pain.

I remember the many days where The Roommate and I spoke about a myriad of subjects. At the time we met, I was beginning the novel that would eventually take me to Middlebury Bread Loaf in Sicily and musing on what I should write in terms of chronic illness. The Roommate suggested I incorporate more naps because the severe fatigue of chronic illness often goes overlooked in storytelling. I was warned as well of over-romanticizing any part of illness, as they felt had been done in The Fault in Our Stars. It was a message I heeded in every scene wherein a vertigo spell was involved, or when another character suffered a severe breakdown from a compilation of traumas. I listened to their poetry, and the musicality of their voice, punctuated by the rhythm of injustice that needed to be resolved. For a project in their psychology class, I agreed to be an interviewee, and though I do not remember the project’s outcome, I remember feeling safe to speak truths about a volatile home. Small yet explosive moments, like my mother yelling at me because I seasoned my food.

“I’ll yell at you if you don’t season your food,” they’d joke. “Let me cook for you, you can have all the spice you want.”

All these days led up to a beautiful Pride, wherein I felt a sense of true togetherness. Our day began with banter about mobility, with waves of vertigo initially making me trip over my own feet. I had offered to push their wheelchair, but they joked in response, “you’re too much of a crip to push me.” An ironic comment in relation to someone like myself, who can go from wiping out under waves of vertigo to dancing like I’ve lived on a stage. All through the train ride to the parade, we each had an arm around each other and held each other’s hands. For every set of corporate beads given out in celebration, The Roommate was fully prepared to rip away the logos for a “truly happy Pride.” In a celebratory lunch after the parade ended and the rain began to fall, The Roommate made a point of signing for me if the restaurant we visited got too loud. Through the instances where I needed a break from straining to hear, they joined me until I felt steady enough to return to noise. Our train ride back was as affectionate as the first, and the day ended with ice cream and “But I’m a Cheerleader.”

Rarely does a story of things not working out come with a happy ending, but this is one of the few that does, wherein the affection will not allow animosity to grow. The Roommate and I, for the closeness we developed, were unable to be together because of differing faiths. Their faith runs through their bones, driven by a heart beating with conviction that is nothing short of admirable. I may have been raised in a different faith, but I have since became agnostic, believing that what matters most is the present and all we can do to support humanity. It was a mindset that I was not willing to give up, and it was easy to see why The Roommate wanted partners within their faith. More than emanating it from every fiber of their being, they were determined to share it with future children. Who was I to ever begrudge someone a central part of their heart and a pillar of their visions of family? Sad as I may have been to see there was no future for us, I cared more that they were happy and could have their dreams. With the intense history they shared in their poetry, they have been long overdue for happiness.

The Roommate was my first foray back into affections of any sort after my heart was broken by a love from half my life. Whether or not they realize it, The Roommate was the beginning of opening a door that I thought would stay closed forever. In spite of the days where I felt the pains of my broken heart, it was The Roommate’s presence that kept me from complete despair. I learned from them what it meant to feel affection while receiving kindness, and it was this combination that kept me open to future partners. For all I may have written about romance in the time The Roommate and I had met, it was very different to fathom those feelings in real life. The Roommate kept freshness about affection, particularly between two disabled people, an additional spark for me to keep writing as I healed from my last heartache. Knowing The Roommate makes me grateful to be pansexual because this openness across all genders paved the road for them to change my life. Everything they brought to me still leaves a smile on my face still when I think about them, and I’ll always be thankful they came into my life.

Christina Lisk is a writer committed to disability advocacy in the nonprofit sector and the arts. She wants to design programs where people with disabilities may use creative writing to find empowerment in an ableist world.

Previous: Pride Lives Within Me

Next: Healing Out Loud