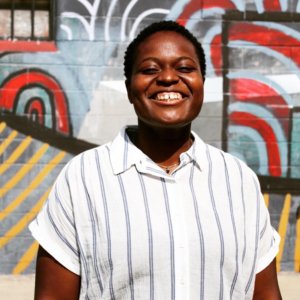 Los Angeles, CA, February 21 – Teren’e Chambers is a Black Disabled content creator with autism who has a passion for visual storytelling. Born and raised in Los Angeles, Chambers graduated from the University of California, Santa Barbara in 2020 with a Bachelor’s Degree in Film, Cinema, and Video Studies. Chambers aspires to one day become a director, focusing on pre-production, and own a production studio that will open the door to anyone interested, and be inclusive to everyone regardless of background or status. She plans to turn this passion of hers into a career to uplift others with disabilities and people of color. Everyone’s stories matter!

“Being a filmmaker to me means that I have a vision, a different view of the world, and a creative side,” Chambers said. “I enjoy what I do! I took my hobby to a professional level.”

Chambers’ passion for storytelling, content creation, and filmmaking started as a kid when she discovered a cam recorder from her dad. Growing up as a neurodiverse individual, Chambers often felt different among her peers and did not connect with others. Chambers recalls that she had never been invited to any birthday party before, but when someone invited her, it meant so much to her. From that moment, Chambers began to document her life growing up voa a cam recorder (now her iPhone camera) of her experiences of what her life was like and how people perceived her. This is an ongoing project, which she plans to one day make into a live documentary showcasing her lived experience as a Black person with autism.

Chambers is currently the Digital Content Producer & Editor at Pop! By ROSIES, where she works closely with crew members to plan, brainstorm, manage, and edit videos utilizing various camera equipment and editing software. Prior to this, she was recently a part of the  WarnerMedia Access Early Career Bootcamp through RespectAbility, where she found a sense of support and community in the film and entertainment industry as she networked and collaborated with industry professionals and colleagues who have similar career goals and interests.

“I really love this program and how everyone is so supportive of each other,” Chambers said. “I would love to work with and hire these people in my own production studio one day.”

Chambers also recently participated in a PSA produced by RespectAbility in recognition of Black History Month. Chambers had not been on set in a while due to COVID-19.

“I was really happy to be on set and a part of the cast, while working on this PSA alongside the amazing director and crew,” she said.