What Do You Miss When I Can’t Get Through The Door? 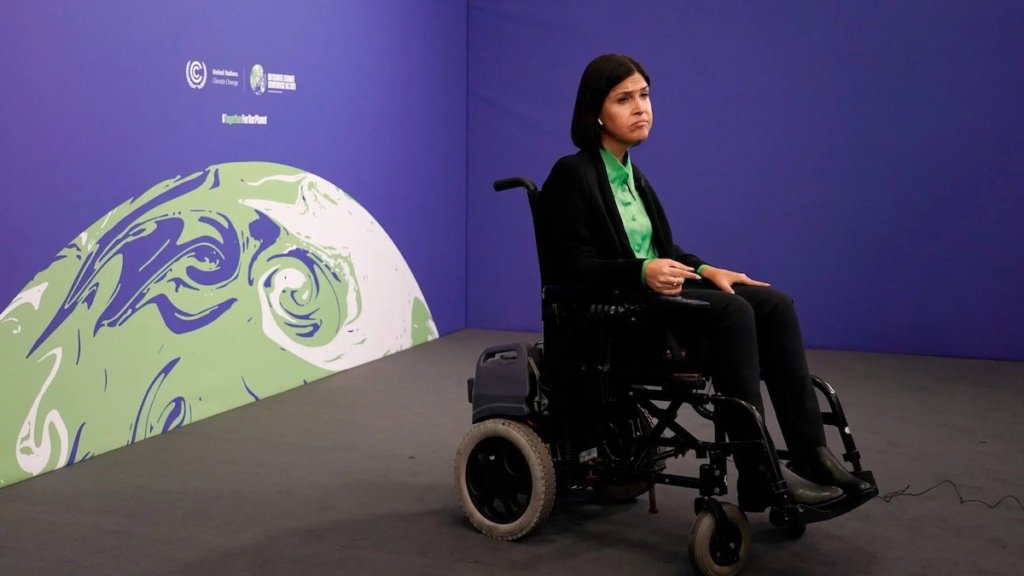 Karine Elharrar at the UN summit she couldn’t enter due to a lack of wheelchair access.

For those of us who have long waited to see people who proudly embrace their significant disabilities in positions of power, the fact that Israel’s energy minister, Karine Elharrar, is a power wheelchair user can easily lead one to believe that the arc of history is changing. And it probably is. Sadly, this week demonstrated just how far we still have to go. The Times of Israel offers the following description of the Minister’s arrival to the United Nations Summit.

“For two hours on Monday, organizers refused to let Elharrar enter the large compound in the vehicle in which she arrived, Elharrar’s office said. They eventually offered a shuttle transport to the summit area, but the shuttle was not wheelchair accessible. The energy minister was forced to return to her hotel in Edinburgh after organizers refused to accommodate her.”

The rest of the article tells quite a tale. There were accessible entrances, just not ones to which she could bring her car. The organizers told her that she needed to somehow get out of her wheelchair, and walk over a kilometer to get the door.

And then the Times article ends with an apparent picture of triumph: a blue ramp (not sure why the color matters). Prime Minister Bennett walking next to Minister Elharrar up the ramp after her vehicle has been allowed to check it out. An elbow bump and an apology from Prime Minister Johnson of the UK.

And yet to those of us who use wheelchairs, it doesn’t seem like much of a triumph. It seems instead like another bitter story of unnecessary exclusion that was eventually rectified. I can’t tell you how many times I’ve experienced this myself. The accessible door to which no one has the key, but they will get it tomorrow. The conference where I can’t attend the first session, but am quickly met with “oh, don’t worry, if you tell us which sessions you want to go to, we’ll make sure that those sessions are all accessible.” The social event where I can’t get into the restaurant, and the evening is disrupted as my peers and I try to find another locale. The rarer moments, thankfully, when my peers stay in the inaccessible locale, and suggest that I just have to miss this gathering, but they’ll be sure to plan for me, next time.

The energy minister herself said it best: “This is scandalous conduct and it shouldn’t have happened…I came with certain goals, and I couldn’t achieve them today.” The fact is, you can never get the day back, or the session back, or even the hour of your evening back when you’re scrambling to find a new venue. There is a practical cost to exclusion, far beyond the emotional weight of hitting a wall that shouldn’t be there, especially in 2021.

Most of us who work in the disability world feel that there shouldn’t be inaccessible events at this point. While we know that even 31 years cannot erase centuries of inaccessible design, there are surely enough access options at this point to make sure that public facing events are accessible. We must at some level recognize that holding an event in an inaccessible locale is a decision at this point, and one with casual ableism built-in.

The facts of this event drive home just how profound this choice can be. The Times of Israel article also quotes a UK official saying that this had been “a miscommunication and organizers, unaware of Elharrar’s requirements, had not made the right arrangements at the particular entrance she was coming to.” He is quoted as saying “I know that at most of the other entrances, wheelchair access is there. It was because she came to an entrance where they didn’t have that provision.”

There’s so much to observe in this quote. Somehow, despite the energy minister’s relatively world-famous status as a person with a disability, and the relatively elite guest list, they didn’t know she was using a wheelchair? How, exactly? Did they just assume that because she was a wheelchair user, she wouldn’t possibly attend the summit? Furthermore, if the building has so many accessible entrances, what on earth does it say about the attitudes of the organizers that in two hours time they couldn’t direct her to a single one?

31 years after the ADA, there remains a significant debate about physical accessibility in this country, between those who say they still need time and notice, and those who believe that three decades might really be long enough to make modifications. A few years ago, at the behest of the ACLU, I weighed in on that debate. This situation, however, is much simpler.

The access barriers for Minister Elharrar could have easily been fixed with a change in attitude, and they were removed by the next day. Many of the personal examples that I mentioned earlier were fixed within hours or days. Some might see that as a triumph, but I don’t. When an event is inaccessible due to a lack of funds, or a major architectural barrier, I still think that it implies poor choices, but at least I understand that access was facing significant headwinds. When an access challenge can be fixed simply and quickly, it means that no one was thinking about it in advance. Otherwise, it would have been taken care of.

This, then, is the challenge that I put before all of you. Make sure that access and inclusion are at the forefront of your mind when planning an event. In the earliest days of planning, you can even change venues with ease. Even the day before, you might be able to fix problems like the one in this article. I urge you to do it – not to be kind, or even in the pursuit of justice. But rather, do it in the recognition that just like we will never have the participation of Minister Elharrar in the first day of the UN Climate Summit, there may be many contributions you can never get back if you are late to the start.

Next: Ensure Your Event Planning Opens The Door For Every Contribution, Including Those Of Jews With Disabilities