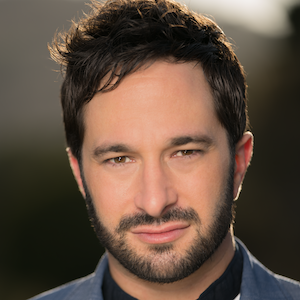 Aaron Wolf is an incredibly talented filmmaker, an award-winning actor, and an overall wonderful person! Aaron has created a multitude of films, ranging from The LD, which helped get him into film school, to the more well-known films Restoring Tomorrow and The Walk, to his recently released adventure-thriller TAR. These films are based on Aaron’s Jewish roots and experiences with his grandfather and learning disabilities. Looking at the success of these films, one might assume that Aaron has always been completely connected to his Judaism and open and accepting of his learning disabilities, however his journey and relationship with disability and Judaism has not been linear.

Aaron grew up as “Jewish royalty,” as his grandfather was the senior Rabbi at Wilshire Boulevard Temple in Los Angeles. Growing up in the comfortable embrace of his grandfather’s passion and position, young Aaron found Judaism really cool. He has always felt that Judaism is a “really accessible, beautiful, fun thing.” This was largely due to the way his grandfather practiced and built a Jewish world. In Aaron’s childhood, Judaism was about “acceptance, being okay with what we don’t know, and embracing what we do know.”

Aaron attended NYU’s Film and Acting Program for college, where he experienced a drastically new environment and began to lose touch with his Judaism, which was so closely tied with the Wilshire Blvd Temple and his grandfather back in Los Angeles.

After this experience, Aaron made the choice to move back to Los Angeles to further his film involvement, where the current Senior Rabbi at Wilshire Boulevard Temple, Rabbi Leader, asked Aaron to document some of the work that was being done to revitalize their Temple. As a result, Restoring Tomorrow was born. Aaron began to see himself as a “microcosm of so many people around the country and around the world who take their place that matters for granted.” People don’t always realize how important one’s roots are, especially for those in the future. If you can build that sense of community that is accepting of all, why wouldn’t you?

Aaron has taken an inclusive and individualized approach to how he leads his life. He strongly believes in bringing communities together and creating a space where everyone’s voice can be heard in the dialogue, and accepting others as they come. Growing up with learning differences, Aaron was bullied, seen as different from his peers, and treated differently than others he went to school with. This has been the driving force behind “I Am Able,” a social movement campaign for inclusive education for all, no matter what their disability or difference is. “The classroom needs to be a place for everyone to be safe. I want people to feel like they are a part of, not apart from. I think we’re all different and special in our own unique ways.” A companion film in production titled Being Invisible: We Are All (dis)ABLED will dive deep into the subject to broaden awareness and further squash stigmas and educate for more to see. You can visit www.IAMABLE.info for a preview.

Aaron summed it up by saying, “Judaism and disability are a part of who I am, and they’re going to find a way into my world.” His ability to incorporate these identities into his work, and his thirst to always learn more about the world we live in, are just a few of the reasons why Aaron has been so successful in his prior speaking tours. It has meant a lot to Aaron to have people come up to him after a speaking engagement and say “I want to go visit my temple, or my church. You just made me realize I need to call this person that mattered so much to me when I was growing up.” If you are interested in having Aaron come and speak at your organization, please contact Jake Stimell at [email protected].

Next: Now Streaming: “Born For Business” Shines the Spotlight on Disabled Entrepreneurs