Docuseries from the Emmy Award-winning creators of “Born This Way,” Bunim/Murray Productions, as well as Shopify Studios, begins streaming on Peacock and CRAVE on August 23 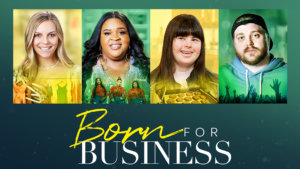 Los Angeles, August 11 – A powerful docuseries that spotlights the untold stories of four entrepreneurs with disabilities, Born For Business gives viewers an insider’s look at what it takes to launch and run a thriving small business. Just as each entrepreneur is on the brink of success, they must navigate the complications that the COVID-19 pandemic presents.

Chris Triebes of The Congregation Presents is a single father with spinal muscular atrophy (type III) who is making waves in the music industry with his concert production company, two venues, and music festival ticket service. He said he was interested in appearing on Born For Business due to the lack of representation of people with disabilities “who have a disproportionately low voice” in media, especially when it comes to portraying stories of proactive business owners making their own opportunities and succeeding. He laments the often-repeated tropes of pitied people with disabilities who are painted as helpless or unresourceful. “I want to help normalize disability,” he said in a conversation with the disability advocacy nonprofit RespectAbility. “I think I can be someone who’s good for that.”

The show also features: Qiana Allen of Culture’s Closet, a fashionista with lupus who opened a plus-sized boutique, which quickly became one of America’s top plus-size clothing stores; Collette Divitto of Collettey’s Cookies, a baker with Down syndrome who owns a successful cookie brand that employs people with disabilities; and Lexi Zanghi of Always Reason, a millennial entrepreneur with anxiety who runs a three-year-old fashion brand that will soon expand to its first physical location.

According to the Bureau of Labor Statistics, people with disabilities are self-employed at a rate nearly twice that of their nondisabled peers. That is because people with disables, by definition, need to find new and less traditional paths to success. In fact, as of the 2019 American Community Survey, approximately 700,000 workers with disabilities were self-employed, enjoying the flexibility and opportunities that entrepreneurship provides. That leads to determination and innovation – key features of Born For Business – and what viewers need as society enters unprecedented times. Approximately 70 percent of people with disabilities want to work and thousands could become entrepreneurs if they can develop their skills and access capital.

Born For Business, which features talented and diverse entrepreneurs with disabilities, creates a paradigm shift for people with disabilities because it is authentic and shows what people with disabilities CAN achieve. At the same time, it does not sugar coat it. It shows stories of resilience and innovation that will have universal appeal as they are perfectly timed for a moment when people are struggling to get past the challenges of this time.

All 10 episodes of Born For Business will stream on Peacock (USA) and CRAVE (Canada) starting August 23, 2021.

Next: Pitch Decks and Selling Your Story with Manon de Reeper