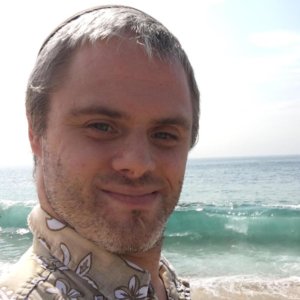 Shlomo Meyers was born in Manhasset, New York on December 6, 1985 with Down Syndrome. He is the middle child in a family of seven children. Meyers currently lives in Los Angeles with his wife, Danielle. He has been working at Maimonides Academy in Los Angeles since 2014.

Rabbi Spector, a family member of Meyers’s, aided him in getting his first job. He was incredibly happy to get this job, as his job search was not easy. This first job was working in a school, and since then, he has worked in several other schools and Jewish camps. He is looking forward to more active years in the future, filled with the work he loves!

Meyers is a man of many hidden talents! Something you probably didn’t know about him is that he used to swim and was even a part of the Special Olympics! He also has a deep passion for Jewish and Disney music, and loves to sing. Music and movies help him to feel less anxious, and to slow down his thoughts.

These are skills that he started to learn at Keshet, a Chicago organization he has been involved with for over 20 years. Keshet has a special place in Meyers’s heart, and provokes joyful tears when talking about it. When he was with Keshet and had his bad days, they really helped him learn how to deal with those types of days. He said that learning how to deal with bad days “is different when you have a disability.” Aside from music and movies, Meyers’s wife is someone who can give him a smile on days when he does not have one, and that is an incredibly special gift. His wife is very positive, and always has a smile on her face.

Growing up and living with Down syndrome, people sometimes underestimate Meyers and make assumptions about his ability to communicate. However, Meyers identifies that he has a very small stutter, and does a good job communicating with others. In fact, he does tons of speaking engagements, which have aided in his learning and execution of communication skills. When doing these engagements, he takes pride in focusing on the people he is talking to and making good eye contact. In fact, a great piece of advice he was given, was “look at the people and read your notes at the same time and have a smile while you do it!”

While Meyers is currently traveling to Chicago, when he gets back, he would love to perform another speaking engagement. If you are interested in having him as a speaker for your organization, please reach out to Jake Stimell to book him. You can reach him by emailing [email protected].

Next: Partner Spotlight: The Jack and Shirley Silver Center for Special Needs at the Marlene Meyerson JCC Manhattan