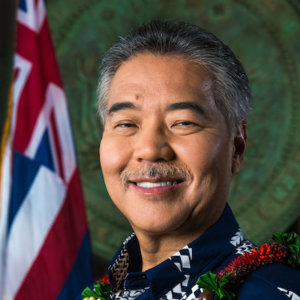 “People with disabilities are productive and loyal, and deserve the same opportunity to earn an income and achieve independence like anyone else,” writes Gov. Ige in the proclamation. “The State of Hawai’i has a vested interest in increasing the inclusion of people living with a disability by providing access, meaningful services, and improved outcomes for all citizens at the state, county, local, and private sector levels.”

Activities throughout the month should reflect the message that people with and without disabilities share the same workplace goals and values. On Oct. 30, the state legislature will be cosponsoring a reverse employment fair that sets people up for entry level jobs while celebrating success stories. 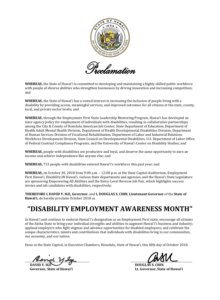 An annual celebration, National Disability Employment Awareness Month (NDEAM) is dedicated to raising awareness about disability employment issues and celebrating the incredible contributions of people with disabilities. In total, there are 66,031 working-age people living with disabilities in Hawai’i. That total includes people who are blind or deaf or have other visible conditions such as spinal cord injuries, as well as people with invisible disabilities including learning disabilities, mental health or Autism.

Among them, 26,356, or 39.9 percent have jobs. According to RespectAbility, a nonpartisan nonprofit organization that works to fight stigmas and advance opportunities for people with disabilities, Hawai’i ranks 18th compared to the rest of the country. It is great news for the state that employment has risen, and this month presents the opportunity for even more growth.

Since his election in 2014, Gov. Ige has been committed to helping people with disabilities get jobs. Last October, Gov. David Ige allocated the Department of Labor and Industrial Relations (DLIR) $2.5 million so DLIR can invest it in youth disability workforce development. In Summer 2016, Ige hired 223 young people of disabilities in temporary government jobs.

Additionally, “through the Employment First State Leadership Mentoring Program, Hawai‘i has developed an inter-agency policy for employment of individuals with disabilities,” the proclamation states. This commitment has supported collaborative partnerships among the City & County of Honolulu American Job Center, State Department of Education, Department of Health Adult Mental Health Division and many more.