Variety, Easterseals Challenge Entertainment Industry to Include People with Disabilities in Writers’ Room and More

Los Angeles, California – “When we talk about diversity, we need to include disability.”

This was the message last week at the beginning of Variety’s A Night in the Writers Room, an event aimed at educating and providing writers resources and information from seasoned writers and showrunners.

Before two panels featuring writers of drama and comedy television shows, Easterseals and Variety announced a new partnership and challenge to the entertainment community to be more inclusive of people with disabilities both in front of and behind the camera. 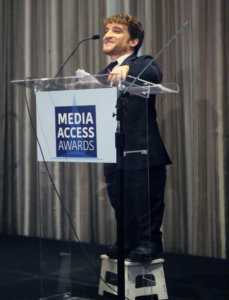 “True inclusion will not happen until disability has a prominent place at the table,” said Nic Novicki, founder of the Easterseals Disability Film Challenge.

During the first panel at the Jeremy Hotel in West Hollywood, Salim Akil of Black Lightning stressed two important points. “Diversity is not diversity for sake of filling quotas,” he said. “It expands our vision and creativity… If we just have one sort of people to bounce ideas off of, it makes it very narrow.”

When the event was first announced, Variety came under fire for not having enough gender parity on its panels – a mistake that Variety management quickly fixed. However, even with the announcement at the beginning of the event and the focus on diversity including gender, race and sexual orientation, one aspect still lacked much mention during the panel discussions – disability.

David Shore, creator of The Good Doctor, was the only panelist to mention the word “disability.” Interjecting actor Akil, he pointed out, “the show I’m on is all about that,” making the point that people with disabilities need to be included in the overall diversity and inclusion conversations. He therefore said having “differently abled” writers in his writers’ room was important. He also brought up the fact that the “employment rate is startlingly low” for people with disabilities.

Several panelists stressed the importance of not looking at hiring women, people of color or people with disabilities as a favor. People from all backgrounds are not only capable of working in various jobs behind the camera but they often add more value.

Joel Fields of The Americans stressed they have diversity in gender, race, sexual orientation, age, “but the one thing we didn’t have was diversity of talent. All of our writers were talented.”

“I know what I think about things so I want to hire as many people who do not think like me,” Chris Mundy of Ozark added.

Krista Vernoff of Grey’s Anatomy hires writers simply by reading and picking the best scripts – not by resumes and past experience. She wanted to bring in more writers of color so requested scripts from agencies from people of color only.

“The talent rises to the top but if you control your profile to be inclusive, it radically changes your staff and this town,” she stressed.

George Pelecanos of The Deuce added, “If there are two people that are equal, I am going to hire the woman or the minority. Because we have to make a correction.”

Using Television to Humanize and Normalize

One Day at a Time showrunner Gloria Calderon Kellett sees her show’s role as more than just making people laugh.

“We’re trying to humanize and normalize,” she said, especially in today’s climate regarding people who are of Latinx descent as the show features an immigrant family. “How do we break through and make people view us as valid.”

The show not only features Latinix but also veterans, a girl who is coming out as LGBTQ and a wheelchair user.

“I went in saying I want to tell a Latinx story since I do not see myself on TV and here were all these other communities seeing themselves as well,” Calderon Kellett added.

“We knew we had to be held accountable to all the doctors and people with BPD,” she said, but “what we did not anticipate is that fans of the show started giving each other advice.”

Bloom gave examples of people on Twitter saying they have suicidal thoughts but no medical insurance and asking where to go. Other fans of the show responded with advice.

“Seeing how fans helped each other was really beautiful,” she said. “It made us want to be as specific and true as possible… We saw the individual actions first hand.”

Several panelists stressed that with the lack of minority-focused shows, there is a lot of pressure to ensure success.

“There are not a lot of Latinx shows,” Calderon Kellet said. “Regarding all minority shows, if one doesn’t succeed, then there’s this idea that we can’t do another one because that one failed.”

Stephen Glover of Atlanta agreed. “If you have a black show and mess up, well, no more black people anymore,” he said, before stressing that failure is part of the process. There needs to be the option for all shows, including minority-focused ones, to take a risk without the feeling that if they succeed then others will not have the option to even try.

Calderon Kellet added she is “trying to carry the banner so there can be shows about other people, not just Latinx.”

Akil brought up the important point that in addition to a gender pay gap, there is a racial pay gap. But, he said Black writers, producers, costume designers, etc., are “so happy to be working now” that they “don’t want to make a fuss because they want to work.” They are “taking less pay because they think it is the golden age, not something that is going to last.”

But Calderon Kellett said part of her job is ensuring the diversity and inclusion efforts continue to grow.

“I want part of our job being creating future show runners,” she said, emphasizing the importance of “bringing these people up as we go.”

When it comes to ensuring diverse storytelling and representation, Fields said there was a need to “not just look at our room and department heads but whole crew.”

As stressed earlier, hiring women, people of color, all sexual orientations and disability status is a recipe for success.

Tagged as: Atlanta, Black Lightning, Crazy Ex-Girlfriend, Grey’s Anatomy, One Day at a Time, Ozark, The Americans, The Deuce, The Good Doctor

Previous: Steve Bartlett: Learning to Play on the Field

Next: RespectAbility Urges Caution Re: Departments of Education and Labor Merger