For First Time, Frances McDormand Calls for Full Inclusion at the Academy Awards

Los Angeles, Calif., March 5 – In a historic call for more information, Academy Award winner Frances McDormand called for an inclusion rider in contracts – a provision that ensures diversity and inclusion in not only the cast of a Hollywood project, but also the crew. The result can lead to a Hollywood A-lister ensuring gender, racial, LGBTQ and disability equality via his or her contracts.

“For those of you asking about the #InclusionRider, it’s designed to ensure equitable hiring in supportive roles for women, POC [people of color], the LGBT community, & people w/disabilities,” the Annenberg Inclusion Initiative tweeted. Stacy Smith, its Founder and Director, previously talked about this concept during a 2016 TED Talk.

An inclusion rider “has always been available to all – everybody who does a negotiation on a film – which means you can ask for or demand at least 50 percent diversity in not only the casting but the crew.” McDormand, who won the Oscar for Best Actress in a Leading Role, told The Hollywood Reporter backstage after the Oscars. “The fact that I just learned that after 35 years in the film business – we aren’t going back.” 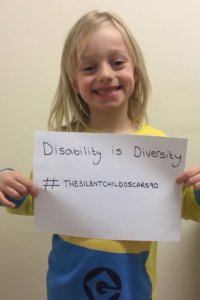 A big winner in the field of disability inclusion is The Silent Child, which won the Oscar for Best Live Action Short. The film is about Libby (Maisie Sly), a four-year-old girl who is deaf. Sly is deaf herself, which is important to note as the majority of films winning for portrayal of disability often feature actors without the disability.

“It is most likely no coincidence that the performance in sign language that won is the one that involved an authentic ‘signer,’” said Delbert Whetter, a filmmaker who is deaf. “To learn to express oneself in sign language requires the use of facial expressions and gestures that take years, if not a lifetime, to learn to do. Rendering sign language performances by non-native signing actors that focuses solely on mimicking hand movements is at best a two dimensional representation of a four-dimensional linguistic experience.”

In accepting the award, Rachel Shenton, who wrote the script, signed her speech in British Sign Language in addition to speaking.

The Oscar for Best Picture went to The Shape of Water, which stars Sally Hawkins as a janitor without speech who falls in love with an amphibian held captive at the laboratory where she works. Hawkins herself does not have a speech disability, which is common when it comes to casting actors portraying people with disabilities. In fact, nondisabled actors on television play more than 95 percent of characters with disabilities. When an actor mimics someone from any minority group, whether it be racial or disability, he takes a job from an actor who genuinely has that characteristic and perpetuates that group’s under-representation in the industry. Yet it is important to note that Hawkins does have a chronic illness, an invisible disability.

A common misconception is that including actors with disabilities will be too costly. According to a study conducted by the Job Accommodation Network, a service of the U.S. Department of Labor’s Office of Disability Employment Policy, a majority (59 percent) of accommodations do not cost a single cent, while the rest typically cost only $500.

Three of the films nominated for Best Visual Effects – Star Wars: The Last Jedi, War for the Planet of the Apes and Guardians of the Galaxy – included team members with Autism working for Exceptional Minds’ studio that employs young adults on the autism spectrum in digital animation and visual effects.

“We are looking to change hearts and minds,” Co-Founder and Vice Chairperson Yudi Bennett said of the importance of people with disabilities working both in front of and behind the camera. “We need people in the film industry who are not all the same; diversity is a blessing.”

It was a night of firsts for women, people of color (Jordan Peele, first black screenwriter to win best original screenplay) and the LGBTQ community (A Fantastic Woman features a transgender storyline with an openly trans actor in the lead role), among others. Ashley Judd, Anabella Sciorra and Salma Hayek Pinault specifically drew attention to the #TimesUp and #MeToo movements during a special segment.

“We work together to make sure the next 90 years empower these limitless possibilities of equality, diversity, inclusion, intersectionality,” Judd said. “That’s what this year has promised us.”

Following their speech, a video outlined how the Academy is working to increase its diversity and inclusion efforts – from gender and race to those who are transgender. However, people with disabilities, the largest minority group in the U.S. that also cuts across every demographic, were left out of this segment.

“Hollywood has to catch up with its audience,” RespectAbility President Jennifer Laszlo Mizrahi said. “Diversity must really mean diversity – and that includes the one-in-five Americans who has a disability. Disability needs to be a part of every conversation on diversity. When films and television shows lack the inclusion of disability in their diversity efforts, Hollywood is disenfranchising the 56 million Americans who have a disability.”

According to The Media, Diversity, & Social Change (MDSC) Initiative, only 2.7 percent of all speaking or named characters in film were shown to have a disability in 2016 (up from 2.4 percent in 2015). None of the leading characters were from an underrepresented racial/ethnic group or the LGBT community.

The success of films like Black Panther, Wonder Woman and Coco prove that diversity wins.

“I remember a time when the major studios did not believe a woman or an African American could open a superhero movie,” host Jimmy Kimmel said in his opening monologue. “It was March of last year.”

Pixar’s Coco took home the Oscar for Best Animated Feature. Its producers talked about the importance of including all.

“Coco is proof that art can change and connect the world,” Darla K. Anderson said. “This can only be done when we have a place for everyone and anyone who feels like an other to be heard.”

“With Coco we tried to take a step forward toward a world where all children can grow up seeing characters in movies that look and talk and live like they do,” Lee Unkrich added. “Marginalized people deserve to feel like they belong. Representation matters.”

Pixar has long been a leader in diversity and inclusion and has the opportunity to continue to lead by example by including more people and characters with disabilities in their future films.

“Hollywood has been really, really slow to recognize the diversity of this country,” said Jonathan Murray, executive producer of A&E’s Born This Way. “I think it is catching up fast now. And I think it’s realizing that diversity is good business. I don’t think it’s necessarily because it is altruistic. I think they are recognizing that TV shows and films will do better if they reflect what the country is.”

Next: Rodney Hood: An Ally in Disability Employment and Inclusion