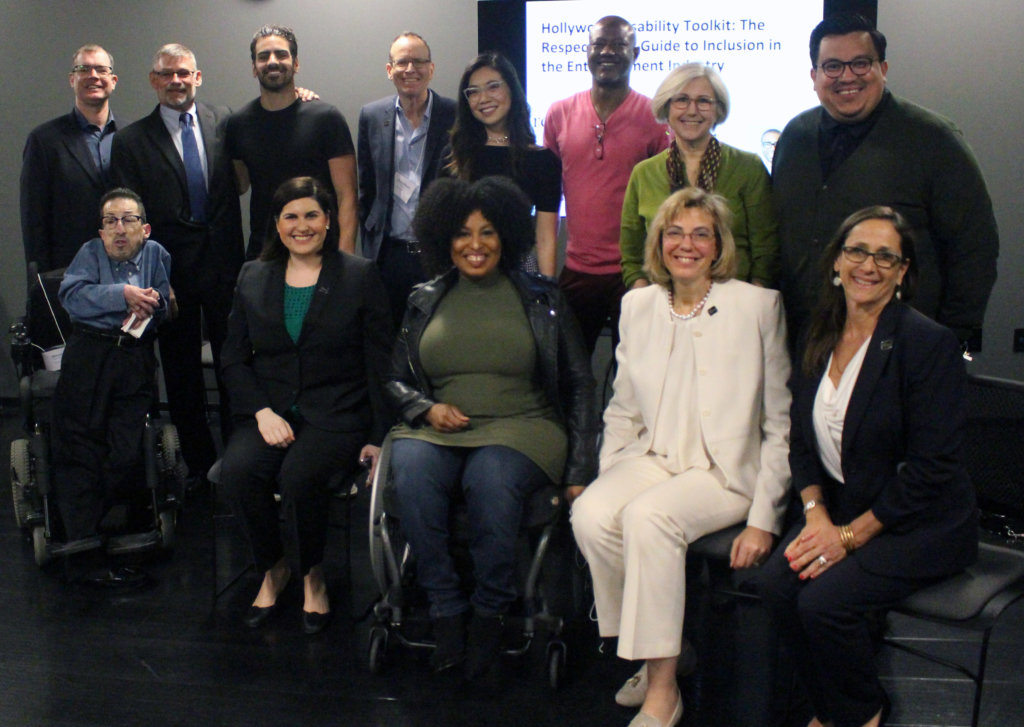 Los Angeles, Calif., March 20 – As entertainment professionals across all platforms work to become more inclusive of minorities, RespectAbility, a nonprofit organization that fights stigma and advances opportunities for people with disabilities, announces the launch of “The Hollywood Disability Toolkit: The RespectAbility Guide to Inclusion in the Entertainment Industry.” The toolkit, which is available online for free, offers Hollywood professionals the facts and sources they need to get disability inclusion right. 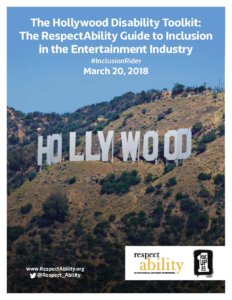 A first of its kind primer for entertainment professionals, it covers a wide array of key issues all in one easy to read place. A Disability FAQ covers topics from the Americans with Disabilities Act (ADA) and the definition of a disability to concrete steps to ensure inclusivity and sample inclusion language. The FAQ also covers resources for hiring employees with disabilities and tax and other incentives that employers have to hire people with disabilities.

“The goal of the toolkit is to ensure more positive, accurate and diverse representation of people with disabilities,” said Delbert Whetter, a filmmaker who is deaf and also serves on the board of directors of RespectAbility. “This means that people with disabilities need to be in the writers’ room, behind the cameras and on set as actors in the same proportions that exist in life. Inclusion Riders need to ensure that when there is a part for a person with a disability that actors with disabilities are auditioned for those roles. TV and film will be much more authentic when every crowd shot includes people with visible disabilities.”

With Hollywood striving to boost diversity and inclusion, one group had consistently been overlooked: people with disabilities. One in five Americans has a disability, but they are represented by fewer than two percent of TV and fewer than three percent of movie characters. In recent years none of the characters with disabilities in leading films were from an underrepresented group or the LGBTQ community, while non-disabled actors portray 95 percent of characters with disabilities on television. However, that is changing with positive portrayals in the Emmy winning AETV show Born This Way, the top new TV show The Good Doctor, plus Speechless, Pablo and more.

“Opening the inclusion umbrella for America’s largest minority – the one-in-five Americans with a disability – is the right thing to do as well as economically smart given that the disability market is valued at more than $1 trillion,” said reality-TV pioneer Jonathan Murray who serves on the board of directors of RespectAbility and hosted the launch of the toolkit. Bunim-Murray, which he co-founded, currently has more than a dozen shows on the air and has long innovated and advanced diversity on screen.

The success of films like Black Panther, Wonder Woman and Coco prove that diversity wins. According to Nielsen Research, consumers with disabilities represent a $1 billion market segment. When you include their families, friends and associates, that total expands to more than $1 trillion. Americans with disabilities represent the third largest market behind Baby Boomers and the mature market. 1.2 billion people on earth have a disability.

“Hollywood has been really, really slow to recognize the diversity of this country,” said Murray, who is also executive producer of A&E’s Emmy-winning Born This Way which stars seven diverse people with Down syndrome. “I think it is catching up fast now. And I think it’s realizing that diversity is good business. I don’t think it’s necessarily because it is altruistic. I think the industry is recognizing that TV shows and films will do better if they reflect what the country is.” 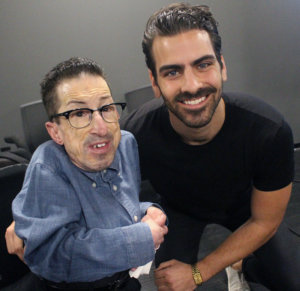 “What we see and hear impacts our thoughts and feelings, which can have life and death consequences,” said model/actor/producer/activist Nyle DiMarco, who is also deaf. “People with disabilities lack adequate access to healthcare, education and employment opportunities. An increase in positive, diverse and accurate portrayals of people with disabilities in television and film would significantly help to end stigmas. Actors, producers and directors can use their talents through Inclusion Riders and other means to fight stigmas and advance opportunities. This is especially critical for the 22 million working-age Americans with disabilities, of which only one-in-three has a job.”

“It is our view that everyone who works on any aspect of diversity and inclusion in Hollywood should be able to help give a hand up to ALL – as a rising tide lifts all ships,” added Steven James Tingus, former Presidential appointee in charge of disability, aging and health care policy who uses a wheelchair. Tingus also serves on RespectAbility’s board of advisors. “Television programming and films that represent the talents, innovation and inclusion of ALL regardless of race and disability are simply are better.”

“RespectAbility is here to support your success,” RespectAbility Chairman Calvin Harris added. “Authentic, raw and real storytelling including actual facts about disability can help enable people with disabilities to get the education, skills and jobs they need to succeed. Indeed, some of the most talented people on earth have or had disabilities.”

The creation of this toolkit would not have been possible without the financial support of The California Endowment. “Visibility and representation matters. We know that accurate and positive portrayals of diverse people with disabilities will not only empower and educate viewers and program creators but will ultimately lead to a more inclusive, responsive and healthier society,” said Jose L. Plaza, who manages the grant for The California Endowment.

While many people contributed to the toolkit, RespectAbility’s Communications Director Lauren Appelbaum was the lynchpin in its creation. She previously worked at NBC News and has a master’s in broadcast journalism from Syracuse University.

“We are grateful for the synergistic efforts of so many of our partners to propel this timely mission further, deeper and wider,” Appelbaum said. “We are looking forward to welcoming new partners in this effort.”

Next: Aaron Dorfman: Serving the Public Good, not Private Interests