Public Comments on Proposed Amendment to Section 100.5 of the Commissioner’s Regulations Relating to the Superintendent Determination Option 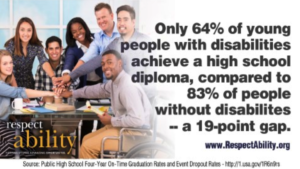 RespectAbility is a nonprofit organization fighting stigmas and advancing opportunities for and with people with disabilities. We are a national organization but believe fundamentally in the positive impact that state leaders can have on disability issues. We work with a broad coalition of partners across government, the private sector and public organizations to help solve problems. As such, we are submitting the following comments to the New York P-12 Education Committee regarding the proposed amendment to Section 100.5 of the Commissioners regulations relating to the Superintendent Determination Option for certain students with disabilities to graduate with a local diploma.

Here are some key facts about people with disabilities in New York state:

We know that, like us, you are committed to success for all students. As such, we challenge the Board of Regents to seriously consider the following issues: high expectations, absenteeism, suspensions, staff capacity and apprenticeship. There are critical connections across these issues that have profound consequences for lives of students with disabilities.

HIGH EXPECTATIONS FOR EDUCATION, JOBS & INDEPENDENCE FOR YOUTH WITH DISABILITIES

First, that by lowering standards the Board of Regent may increase the soft bigotry of low expectations for New York state students with disabilities. Additional efforts are needed to ensure that all New York students show equal advancements through school. Lowering the bar for students will ultimately undercut their future opportunities for income, independence and success.

Second, we have concerns about the stigma that may be associated with a degree that can and likely will be perceived as “inferior” or less rigorous. Our hope is that if that is the choice the Board makes, it is clearly differentiated from a mainstream degree and is only used in specific cases.

As it is vital to promote high expectations, we invite you to read the words and work of David Johnson from the Institute on Community Integration. He wrote that “if you’re setting high expectations for everybody…that should mean everybody.” Lowering standards just to boost graduation rates rans contrary to what needs to be done.

New York state schools serve over 300,000 students with disabilities. Each of those students faces risks for missing classes. When a student misses too much school, they can get too far behind in their academics, and drop out/get expelled. As your Department itself has said “Chronic absence from school….diminishes successful student outcomes and undermines education and learning.” There are several factors that impact the risk of absenteeism among students with disabilities:

We raise these issues because of their consequences for students with disabilities. Evidence shows that chronic absenteeism is a problem in many communities across New York state. As reported by the advocacy organization Attendance Works: “Rochester, Buffalo, Syracuse and Utica, for example, each have chronic absenteeism rates.” This issue is especially important when you look at minority communities in New York. In looking on the data, Attendance Work found that “in Rochester, Schenectady, Troy and Ithaca, the chronic absenteeism rates for African Americans, Hispanics and students with disabilities are all close to 40 percent, and in some cases, considerably higher.” As the Board of Regents looks for ways to increase the graduation rate of students with disabilities overall, we want to encourage the Board to confront the issue of absenteeism. We hope that the Boards will deeply explore what policy levers, priority programs or new efforts can be made to confront this challenge.

It is axiomatic in public policy that what gets measured, gets done. As such, there is a further issue we want to raise before the Board of Regents. There is a clear need for better data and stronger performance metrics around chronic absence among students with disabilities in New York state. In general, the Civil Rights Data Collection from the U.S. Department of Education provides a clear break down of data with breakdowns by gender, ethnicity, disabilities, etc. However, we are aware that the chronic absence data that New York state sent to the Office of Civil Rights was systematically erroneous (drastically underreported, approaching 0% in most cases). We know that New York late reached out to other organizations to corrected data for other reports. However, that was only the TOTAL number of chronically absent students. We certainly believe that everyone involved is acting in good faith, but we hope greater attention will be given to these crucial issues from now on.

It is vital to upskill not only the 600,000 people who work either as special educators, para-educators and professionals helping students with such issues at speech therapy, OT etc., but also to enable general educators, school resource officers and administrators to understand the basics of helping students with disabilities. This is especially true of “invisible disabilities” such as dyslexia, ADHD, mental health disorders etc. For example, many may not recognize a difference between when a child CAN’T follow instructions due to an executive function disorders or other cognitive issue, as opposed to WONT follow instructions due to defiance.

Schools are only a part of the equation. We feel that much more must be done to empower the parents of children with disabilities. Especially, parents for whom English is a second language. As a diverse state, New York is home to growing immigrant communities and communities of color. Consequentially, as those communities grow, more and more children with disabilities will be enrolled in New York school. Our own organization has made a serious commitment to increasing the number of resources that we provide in both English and Spanish. If the Board of Regents does move forward with the proposed change to the Superintendent Option, then we hope effort will be made to fully educate parents about these changes regardless of their native language.

APPRENTICESHIPS AND SCHOOL TO WORK TRANSITIONS

Should the proposed amendment pass, any student who is granted the credential based on determination (here assumed because they have been unable to meet as-written standards) would not be able to “use such credential to meet the requirements for the career development and occupational studies graduation pathway to a local or Regents diploma. In addition, if the credential (or a diploma) is granted by determination that must be clearly stated on the document received. Such a statement may prove stigmatizing when a graduated student attempts to use either credential to obtain a job or further training. Especially if it has been deemed by the P-12 Education Committee that being awarded the credential in such a way as it is then unequal to a standard diploma. New York already has an employment gap of 41.9 percent between those with and without disabilities in their current job market. Maintaining the standards of education provided to those with disabilities is a vital primary step to decreasing this gap.

In closing, we hope that the Board of Regents will continue its deep commitment to supporting students with disabilities in New York state. Our organization is ready and eager to partner with you. If you have further feedback or questions on our Comments, please contact our Policy and Practices Director Philip Kahn-Pauli at 240-483-4134 or [email protected].

Acknowledgements: Critical research and writing support on these comments was provided by the following Policy and Employment Fellows: Adrienne Baez, Stephanie Farfan and Nicholas Olson. These young leaders helped to write these comments and researched the key statistics included in this report.

Adrienne Baez is passionate about where community interaction and policy change meet in the nonprofit sector and hopes to be an active and helpful part of her own disability community. With a desire to increase accessibility, her focus is on education and employment.

Previous: RespectAbility Takes Stand Against Disproportionate Use of School Discipline as Substitute for Good Teaching

Next: The Fosters Tackles Low Expectations for Students with Disabilities