Rockville, Md., Feb. 6 – While many commercials during last night’s Super Bowl focused on diversity and inclusion, the majority did not include people with disabilities.

Likewise, Airbnb’s “We Accept” also showcased people of a variety of backgrounds. The ad is set to music with text laid over close-ups of people’s faces that read: “We believe no matter who you are, where you’re from, who you love, or who you worship, we all belong. The world is more beautiful the more you accept.” The ad ended with the hashtag #WeAccept, which went viral by halftime.

Yet all three of these ads, which promoted inclusion of diverse people, failed to include people with disabilities, which is the largest minority in America, with almost one-in-five Americans having a disability. The disability community often is forgotten in diversity conversations in Hollywood and elsewhere.

According to GLAAD, fewer than two percent of scripted television characters (15) have disabilities.

When we tweeted @CocaCola about their ad asking where were the people with disabilities, the account responded: “While we cannot meaningfully represent every group in 1 minute, we value everyone and everything they bring to our country.”

@Respect_Ability While we cannot meaningfully represent every group in 1 minute, we value everyone and everything they bring to our country.

“Large companies like Coca-Cola, Airbnb and Google Home have the opportunity to challenge this and ensure their television advertisements include people with disabilities,” RespectAbility President Jennifer Laszlo Mizrahi said. “How great would it be if the next time these companies created a commercial if they made it a priority to ensure that the diversity of the roles, including people with disabilities, reflected society at large?” 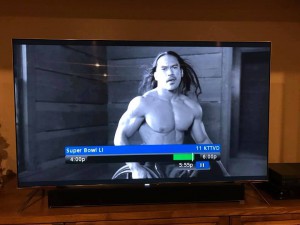 But two other companies succeeded in disability inclusion. In an ad that poked fun at President Trump’s hair, It’s a 10 Hair Care’s commercial featured a wide variety of individuals, including a man in a wheelchair – bodybuilder, model, dancer and entrepreneur Adelfo Cerame Jr.

Cerame, a T-12 paraplegic following a car accident, is a competitive wheelchair bodybuilder. He also has some awesome hair, which seemed perfect for the ad. Watch the whole commercial: It’s A 10 Hair Care Super Bowl Commercial.

Another ad by the American Petroleum Institute, which many deemed controversial, featured uses for petroleum other than gas – like paint, heart valves and lipstick. The ad also included Angel Giuffria shooting a bow and arrow with her prosthetic arm and hand. 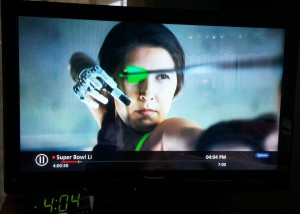 Giuffria, who acted in the Hunger Games, first thought her bionic arm could be a hindrance to her goal of being an actress, but since getting an advanced prosthetic arm, she has learned to embrace it.

“When it comes to Hollywood and big budget movies, they have a specific vision in their heads,” she said in a June 2015 interview. “So at first I always thought it was a hindrance, but since I got this arm I kind of decided that I was going to embrace it. The other hand I had before this it was not as much fun to wear, and this one is fun to wear. I’ve actually gotten great responses, and because of that I booked The Accountant and I’ve been contacted to audition for several other things. I just feel like my arm is actually opening doors where I was concerned were closed to me before.”

The 2015 Super Bowl was an awesome year for television ads including disability, thanks to remarkable personal statements in television ads by football legends Derrick Coleman and Steve Gleason.

Coleman, who is deaf, told his story in first-person for Duracell, while Gleason was featured in an ad for Microsoft. These ads show that wherever there is a disability, there also is ability. Coleman and Gleason, both in real life and their ads, showed that their disability is not a disqualifer for equal and successful participation in life.

What people see and hear impacts what they think and feel – and what they think and feel has life and death consequences. People with disabilities lack access to healthcare, education and employment opportunities. Medical professionals withhold treatments due to valuing people with disabilities less than those without disabilities. This ranges from OB/GYNs recommending abortions for fetuses with non-fatal prenatally diagnosed conditions to orthodontists not placing braces because of prejudice.

“An increase in positive, diverse and accurate portrayals of people with disabilities on television and film can significantly help end stigmas that limit their health and lives,” Mizrahi added. “Changing hearts, minds and behaviors takes great messages, delivery systems and message repetition. Diversity and inclusion processes also are needed inside companies so that diversity and accurate portrayals become natural and consistent.”

Next: Transitional Services and Self-Advocacy in Israel: Presentation