Washington, Sept. 11 – For the first time ever, a series starring a cast with disabilities has won an Emmy Award. Born This Way, which is in its second season on A&E, won for Outstanding Unstructured Reality Series beating out five other series including previous winners Deadliest Catch and Intervention. In addition, two episodes from Born This Way were nominated for Outstanding Picture Editing for an Unstructured Reality Program but lost out to HBO’s Project Greenlight. 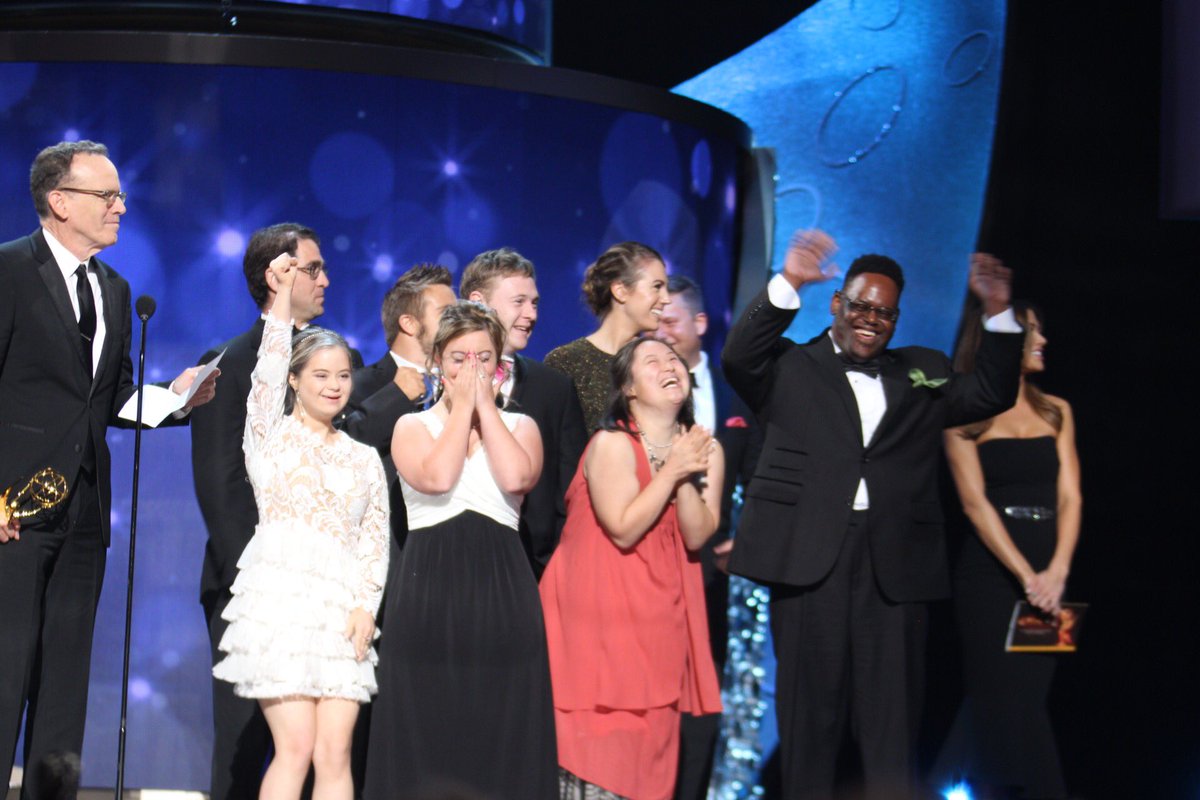 Produced by Bunim/Murray Productions, Born This Way, an unscripted reality show on A&E, follows a group of seven young adults with Down syndrome along with their family and friends in Southern California. Because its focus is on showing their everyday lives, including employment, efforts for independent housing, loves and more, Born this Way breaks down stigmas surrounding disability.

Show creator Jonathan Murray, the innovator behind the first-ever reality-show, The Real World, and many other hit shows including Keeping Up with the Kardashians, said the cast members of Born This Way remind all of us that “every individual has something to contribute.”

“In thinking about the show, we wanted to focus on the ability within the disability and I think that is what is exciting to see,” said Murray. “We are also very proud of the fact that our cast is very diverse. Born This Way is not only the first show to win an Emmy that stars people with disabilities – it also has a cast that includes people who are African American, Hispanic and Asian. This is a breakthrough for those minority communities as well.”

RespectAbility, a nonprofit organization working to end stigmas and advance opportunities for people with disabilities, has been honored to consult during the creation of Born This Way and congratulates the entire team for its hard work in achieving this recognition.

Jennifer Laszlo Mizrahi, its president who herself has a disability and who knows what it means to raise a child with multiple disabilities, said: “I am thrilled that the Emmys see the value in showing real people with disabilities and their powerful lives on TV. For generations TV-viewers saw people with disabilities through the lens of the Jerry Lewis telethon. Though it was well intended, it showed people’s inabilities and used a lens of pity. Born This Way is empowering and uplifting. It shows, as one member of the cast frequently says, that the public should not ‘Limit me.’”

Mizrahi continued: “As detailed in the Ruderman White Paper on Disability in Television, disability often is absent from mainstream film and television – both the depiction of and, even when a character has a disability, the actor often does not. But programs like Born This Way that feature people with disabilities, or that tackle disability issues, in a positive light can be successful both critically and financially. Audiences want to see strong, capable role models with disabilities. By focusing on showing these young individuals’ everyday life choices regarding employment, living independently and dating, Born this Way breaks down stigmas surrounding disability.”

“Hollywood has been really, really slow to recognize the diversity of this country,” Murray said. “I think it is catching up fast now. And I think it’s realizing that diversity is good business. I don’t think it’s necessarily because it is altruistic. I think they are recognizing that TV shows will do better if they reflect what the country is.”

“The majority of Americans have a loved one with a disability – themselves, their child, a sibling; so there’s a hunger for people to see and be reflected on TV and in ways that are accurate and respectful for who they are,” Mizrahi said.

During its first season, Born This Way grew across all demographics each episode, achieving more than a million viewers per episode. Since its premiere, Born This Way’s total viewership is up 83 percent. Recently, the series was chosen as one of six honorees for the 2016 Television Academy Honors, an award that recognizes “television programming that inspires, informs and motivates.”

“By honoring and embracing diversity on television, Born This Way is uniquely redefining the art of honest storytelling and altering the way society views individuals with differences,” Elaine Fontain Bryant, EVP and Head of Programming for A&E said.

Born This Way airs Tuesday nights at 10/9c on A&E.

Entertainment contributes to the values and ideals that define us; and what we desire to share with our children. What we see, we feel. In addition, what we feel impacts how we act.

Next: The Emmys: Seeing Hispanics with Disabilities in Hollywood