Washington, Sept. 23 – As more candidates begin to understand the importance of including people with disabilities within their campaigns, they begin to think about issues of critical importance to the disability community.

A just-released Pew poll shows that voters with disabilities span the political and demographic spectrum and can determine who wins the elections.

Political campaigns know that this is a swing vote and Sec. Hillary Clinton has made this a new centerpiece of her campaign. Likewise, Republican Sen. Richard Burr in North Carolina has made it central to his re-election effort.

To date, 22 down ballot candidates have responded to the #PwDsVote 2016 Senate & Gubernatorial Disability Questionnaire, devoting time and energy to addressing disability issues. Since the first release earlier this month, seven additional politicians have submitted their responses – making a total of 22 candidates for Senate or Governor to have provided detailed answers about their views on these issues for people with disabilities.

This is the first time down-ballot candidates have been asked to complete a questionnaire about disability-related issues on such a wide scale.

The more than 56 million people with disabilities in the U.S. have a long list of policy concerns for the candidates running for governor and the U.S. Senate in 2016: Employment. Stigma. Education. Criminal Justice. Independent Living. Sexual Assault. Housing. Transportation. Adaptive Technology.

RespectAbility, a nonprofit and nonpartisan organization advancing opportunities for people with disabilities, asked candidates on both sides of the aisle to complete a 16 (for gubernatorial) or 17 (for Senate) question survey. The questionnaire asked for their positions on a range of issues important to the disability community, a group that makes up fully one-in-five Americans. Their answers are posted verbatim and in full on The RespectAbility Report, a publication that covers the intersection of disability and politics.

Only one-in-three working-age Americans with a disability has a job, despite the fact that studies show that 70 percent want to work. Moreover, according to Disability & Criminal Justice Reform: Keys to Success, more than 750,000 people with disabilities are behind bars in our nation. Disability is the only minority group that people can join at any time due to accident, illness or aging.

“Since disability doesn’t discriminate, voters with disabilities are every race, age, ethnic group, religion and gender,” RespectAbility’s president Jennifer Laszlo Mizrahi, said. “As the presidential election has become polarized around racial and ethnic lines, disability issues can create the difference between winning and losing.”

The responses are from candidates on both sides of the aisle – with 13 from Democrats and nine from Republicans, demonstrating how disability issues is a nonpartisan issue.

Below are links to detailed answers to the questionnaire.

RespectAbility and TheRespectAbilityReport are nonpartisan and do not endorse candidates. The questionnaire is purely for educational purposes. 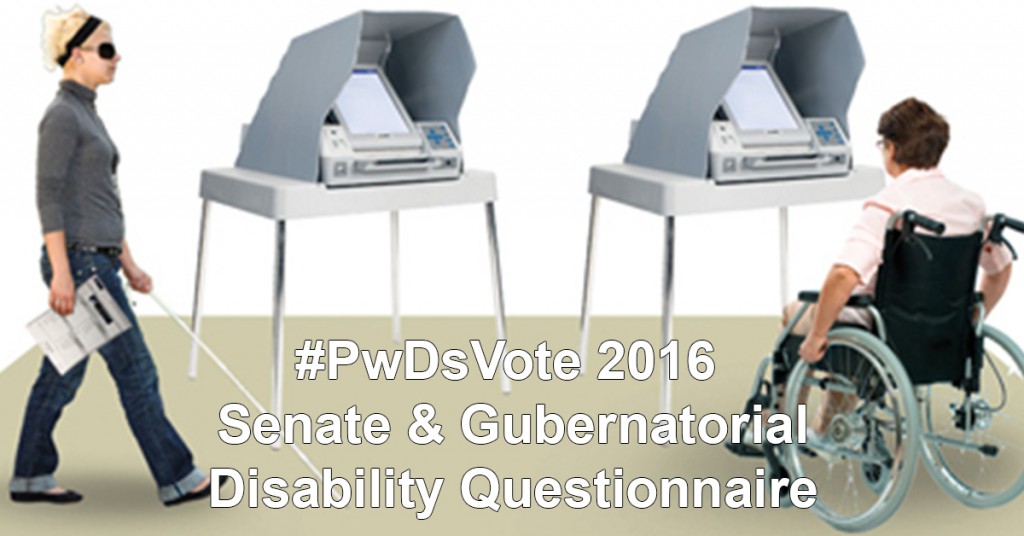 Last winter, RespectAbility sent the #PwDsVote Presidential Campaign Questionnaire to all of the presidential candidates. We had a team of nine people in Iowa and New Hampshire asking candidates questions about disability issues. Democratic nominee Hillary Clinton responded in full. While several Republican primary candidates also did, despite repeated requests, Republican nominee Donald Trump’s campaign has yet to return any answers to the questionnaire. We still hope he will do so in the future now that the campaign is under new management with KellyAnne Conway at its helm. RespectAbility also sent requests to the campaigns of Gary Johnson and Jill Stein.

In addition, the American Association of People with Disabilities (AAPD), the National Council on Independent Living (NCIL) and the REV UP Campaign have released the 2016 REV UP Presidential Candidate Questionnaire. These questions have been sent to all of the current presidential candidates on 20+ state ballots and their responses will be shared publicly once received. They have asked the disability community to encourage all of the candidates to complete the questionnaire by signing-on to a letter and tweeting the candidates.

Between the #PwDsVote presidential and down ballot questionnaires and the REV UP presidential questionnaire, voters who care about disability issues – which polls show is the majority of voters – will have the opportunity to compare how the candidates responded to the same questions in their own words.

RespectAbility and its partners have called on disability activists around the country to call their states’ candidates to urge them to complete the #PwDsVote Senate & Gubernatorial Disability Questionnaire. The questionnaire itself has been written in a way that is acceptable for 501c3 nonprofits, is nonpartisan and is not electioneering.

The linked excel list was shared with disability activists and includes candidates’ email addresses, phone numbers, appropriate contact person (where we could identify) and Twitter handles.

When a candidate responds, the spreadsheet is updated in real-time to include a link to their responses that have been posted on The RespectAbility Report. In addition, update emails will be sent with new responses on a regular basis.

Early voting is starting, and many members of the disability community vote absentee. The responses will be used for individualized state voter guides presenting answers from all candidates in their Senate and/or gubernatorial races. The RespectAbility Report also will be covering these races from a disability angle throughout the political season.

Next: Presidential Debate: Will the candidates address the slaughter of people with disabilities in America?