Kwik Trip’s Retail Helper Program a “Blueprint” for Other Companies

Exterior of a Kwik Trip Store

“Our customers get such a joy out of Luke,” says Terry Johnson, the store leader who hired Cochran just over a year ago through the Wisconsin-based company’s Retail Helper program, which employs people with disabilities. Job duties include stocking, cleaning and food preparation, with shifts built around employees’ bus schedules. To start, employees work a maximum of 15 hours a week, a schedule that allows them to continue to receive disability benefits while gaining skills and independence. Once they master their job skills, they may apply for other positions at the stores.

In Cochran’s case, a brain injury has impaired some of his comprehension. Still, he executes his tasks efficiently and, as Johnson notes, always with a smile.

“You open the cooler, you hear him singing – it just makes your day,” Johnson says.

In fact, the program aids the store at least as much as the individual hired, according to Tammi Meyeroff, a Kwik Trip store leader in Denver, Iowa. A few months ago, Meyeroff hired Romaro Hill, a recent high school graduate with limited verbal abilities, to clean the parking lot and ensure items are properly stocked. 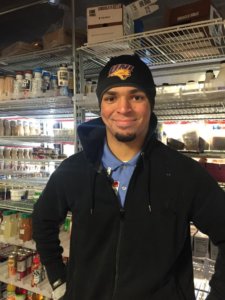 “We have people come in and say it’s so wonderful we hired Romero,” Meyeroff says. “But it’s wonderful, because he helps us. It isn’t because it’s just the right thing to do. He’s able to do get the things done we have to do. His hire is great for him and our community but even greater for our company,” she says, praising his positive, hard-working attitude.

“Our entire team is happy when Romero is in. When they get bogged down at the register, they know everything else will be taken care of,” Meyeroff says. “When a guest comes to the store, the parking lot is their first impression. If it’s dirty, they are less likely to purchase something. If items are not stocked, people cannot buy anything.”

As Joalyn Torgerson, Kwik Trip’s Return to Work Coordinator, puts it: “If everybody in my stores worked like Romero did, I’d have it made.”

Torgerson notes that the retail helpers tend to display more attention to detail and focus on their tasks along with an appreciation for work, making them exemplary employees. As a result, she says, employee retention is high. And the program has imbued the company with a high morale.

While Kwik Trip’s Retail Helpers program has existed for 20 years, the program really took off two years ago. That’s when Kwik Trip partnered with Wisconsin Department of Workforce Development’s Division of Vocational Rehabilitation and Vocational Rehabilitation Services in Minnesota and Iowa. Currently, some 244 retail helpers are employed throughout the company’s stores.

Kwik Trip attributes its success, in part, to a multi-layered network of support. The company works with government agencies that provide expertise and tax incentives for the program. Additionally, Kwik Trip’s La Crosse headquarters provides store managers with guidance to accommodate and support their retail helpers. Finally, the retail helpers receive coaching that eases them into their new positions.

Together, these support systems enable store managers to have more confidence in hiring individuals with more involved disabilities.

“Once you ensure that employees with disabilities have the right skills to succeed, they get valuable entry-level experience, a positive work record and opportunities for future employment within the company or elsewhere,” he said.

Such leadership and trail-blazing innovation have made Kwik Trip a featured example of RespectAbility’s #RespectTheAbility campaign, which highlights companies that exemplify a corporate culture committed to the inclusion of employees with disabilities.

“Kwik Trip and its partnership with state vocational rehabilitation services is an ideal model for chain stores around the country,” said RespectAbility president Jennifer Laszlo Mizrahi. “It has the potential to enable thousands of potential workers with disabilities to kick off their careers while strengthening the success of their employers.”

In doing so, Mizrahi noted that the company authentically stands by its mission statement: “To serve our customers and community more effectively than anyone else by treating our customers, co-workers, and suppliers as we, personally, would like to be treated and to make a difference in someone’s life.”

While Meyeroff is grooming Hill for a full-time position, Cochran says he is comfortable in his current role.

In either case, their contributions as retail helpers have already made a profound and exponential impact.

“The reward and the value out of the program is so much higher than the risk,” Johnson says. “When you see somebody who just wants to have a purpose and wants to feel like they’re a productive member of society, and you give him a job and you hear him singing and you see him smiling and he gives you high-fives, they’re making a difference not only in their lives but in each one of our coworkers,” he said. “It makes the program value-added for everybody – the guests, the coworkers and the person who needs the job.”

Previous: On the Campaign Trail with a Wheelchair