Washington, D.C. – RespectAbilityUSA, a non-profit organization working to empower people with disabilities to achieve the American dream, is proud to release a toolkit for job seekers with disabilities.

Unlike employment outcomes for women, African Americans and Hispanics, which have been improving over time, the gap between employment rates of those with and without disabilities has expanded significantly.

According to RespectAbilityUSA’s President, Jennifer Laszlo Mizrahi, “People with disabilities bring unique characteristics and talents to workplaces that benefit employers and staff. Stephen Hawking is a genius who happens to use a wheelchair. Derrick Coleman happens to be deaf but is also a Super Bowl winning NFL player. The Wall Street Journal and The New York Times have reported on the “Autism Advantage” in many high tech employees. People with disabilities (PwDs) can bag groceries, tend our parks and schools, and be super talents in developing computer software. Today the majority of working age people with disabilities want to work and they deserve the opportunity to achieve the American dream.”

Poll of People with Disabilities Shows Majority Want to Work 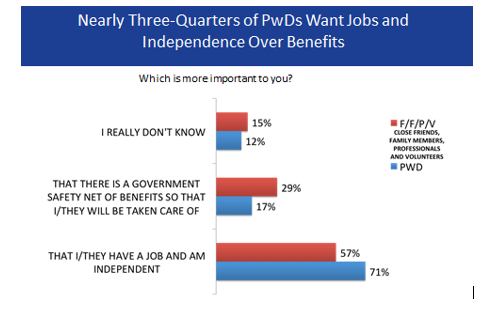 Previous: With Social Security Disability Trust Fund Due to Bankrupt in 2016, RespectAbilityUSA Releases Toolkit for Policy Leaders on Employment for People with Disabilities

Next: KC killing was an attack on us all