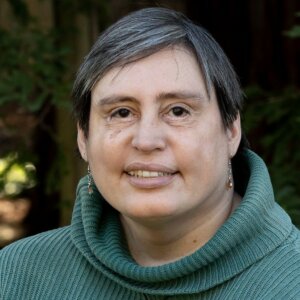 Carey McIntosh is a mental-health counselor, trainer and writer based in Monrovia, California. After growing up in Palo Alto and attending Pomona College, she went to Germany “for a year or two” and in the end spent 25 years abroad. Living in Europe and Africa, she studied and then worked in international aid and development while raising two children with her husband, also an international development worker. She returned to the US in 2017 as a result of a mental-health crisis and has since earned master’s degrees in International Psychology and Clinical Mental Health Counseling. At age 13, Carey was diagnosed with Fascioscapulohumeral Dystrophy (FSHD), the third-most common form of Muscular Dystrophy in the US, affecting approximately 200,000 people nationwide. Until the past few years she was able to walk unaided, but now frequently uses a walker or wheelchair outside of the home. A Jew by choice, she regularly attended services in places such as Lusaka, Zambia and Sarajevo. For the past three years, she has been a member of Pasadena Jewish Temple and Center in Pasadena, where she is involved with the Diversity, Equity and Inclusion Task Force. Carey is also the author of Beans, Bugs and Bombs: Remembrances of a Life Overseas.