Fighting for Students with Disabilities: Spotlight on Roy Payan 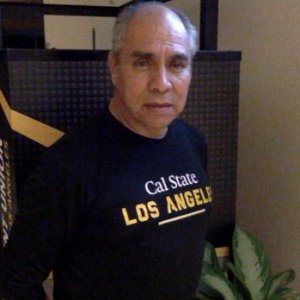 Los Angeles, CA, February 15 – RespectAbility Apprentice Roy Payan didn’t set out to spark a national conversation about disability access in higher education. However, when Payan – who is blind – found himself struggling to gain access to adequate and appropriate materials to complete math classes at Los Angeles Community College, he began his quest to make improvements for himself and other students with disabilities.

According to Payan, one campus official claimed, “there were not enough blind students to warrant a change.”

“He also informed me that if I desired, I was welcome to sue them, but that even if I won the case, he would not implement any changes,” Payan says. “So, I sued them.”

Although Payan knew that the college would never fix the problems in time to benefit him and his classmates, he still filed the lawsuit for all those people with disabilities who would come after them. He won the lawsuit at the district court and before the 9th Circuit Court of Appeals in August 2021. This ruling would require all colleges to be ADA compliant and to make their materials accessible to hearing impaired students. However, instead of attempting to remove these barriers, LACCD plans to ask the U.S. Supreme Court to rule that people with disabilities cannot bring a case under a “disparate impact” theory of discrimination. This could potentially upend the entire spirit of the Americans with Disabilities Act.

How did you try to get the college to make their learning platforms accessible to you before you brought your lawsuit?

I first informed the Office for Students with Disabilities (OSD) at 2 separate campuses of the Los Angeles Community College District that their websites and portals were not accessible to me. I had also attempted to utilize their library databases and found that those were also unusable by persons with visual impairment or blindness. I was repeatedly told that there was nothing they could do about it. I requested that they contact the library vendor and require them to make their service accessible, but my requests were repeatedly rejected.

When I enrolled in one math class after another, they all used a textbook that was improperly digitized or not digitized at all and would have to be digitized one chapter at a time for me. These textbooks also came with an accompanying CD that had homework lessons, uncaptioned or fully articulated videos, student/instructor interactive chat rooms, and many other features that were completely inaccessible for persons with visual impairments or deafness. After informing the instructor and OSD at the LACC campus, I was asked to talk with the Dean and Chair of the Math department. When I met with them, I was repeatedly told by both the Chair and Dean of the department, that they could not do anything about it.

They asked why I thought they had the ability to do anything about it. I informed both of them that they headed one of the largest and most prominent departments in the entire community college board district and that in collaboration with all the Chairs and Deans at the 9 campuses of LACCD, they had the collective leverage to force the textbook vendor to provide their materials in an accessible manner. Both the Chair and Dean told me directly that they could not require the vendor to do anything.  When I inquired why they could not, I was blatantly told by the Chair of the department that there were not enough blind students to warrant a change. He also informed me that if I desired, I was welcome to sue them, but that even if I won the case, he would not implement any changes. So, I sued them.

What made you decide to bring the lawsuit?

After being rejected by one instructor after another simply because I had a visual impairment, I started to become disheartened. At the same time, it made me determined to continue and motivated me even more. When they treated me the way they did, it ignited a passion for advocacy in me that continues to this day.

A few examples: When I first enrolled in courses at LACC, I met with a counselor from the Office of Students with Disabilities (OSD). He informed me of a laundry list of accommodations that were available to me as a visually impaired student. One of those accommodations he stated was that I could have a note taker in class with me. So, I agreed that I would like to have a note taker in class with me, to provide me with digitized notes of any information the instructor wrote on the board or that I was unable to write down for myself. That is when the counselor clarified to me that the college allowed me to have a note taker, but they would not acquire nor provide one and would not pay for it, I would have to acquire a note taker and pay for them on my own, knowing full well that as a student with visual impairment I had limited income. After learning through my research that LACCD receives an annual allocation of $ 25 million for disability accommodations, am I to understand that they could NOT take $ 500 per semester of those funds to pay for note takers for students who are blind/visually impaired?

After learning from other blind students that a psychology instructor whose course I wanted to enroll in used a learning platform that was not fully accessible to persons with visual impairment, I approached the instructor to ask if he could provide accommodations for me. I was told by him that it was not his problem and that I should request help from OSD. By coincidence, I enrolled in a similar course taught by his wife, and she went out of her way to accommodate me and provide the lessons in an accessible format.

I experienced similar treatment in many other courses across various disciplines, but no department was as egregious as the math department. One instructor refused to permit me to record his lecture despite me informing him that I am blind, and that recording was one of my accepted accommodations by the college. He told me he made no exceptions and asked me to leave his class and not return. Another math instructor just told me flatly that he felt that because I am blind, I would slow the rest of the class down too much. He did not allow me to enroll in his class, although he never bothered to test my ability to do the course work and had no idea of my abilities. He based his opinion simply on the fact that I was blind. Another math professor stated that she could not understand why persons with disabilities insisted on attending college if we could not do the work. She went out of her way to humiliate me in front of the entire class by telling me that I was occupying a seat that a more worthy, not disabled student should have been allowed to occupy. This instructor went out of her way to make me feel unwelcome.

Though I must admit that there were some exceptional instructors, for the most part the entire LACCD system had developed a culture of systemic blatant disregard for persons with disabilities and the ADA. This culture of explicit bias had permeated the entire instruction program, to the point that instructors felt they were above the law, because none of them had ever been disciplined or held accountable. The entire LACC District had purposely established a system where there is no accountability, nor any effort to ensure that compliance to the ADA was adhered to. I began to realize that the blatant disregard for students with disabilities in the entire LACC District was emblematic of what little regard they hold for persons with disabilities. They proved my point, when instead of arguing or negotiating the merits of the case, they chose instead to elevate my challenge to the US Supreme Court to strike down the “disparate impact” clause, which will have a negative impact and erode the rights of not only students with disabilities in Los Angeles, but of every person with a disability from California to New York.

Has the college done anything to address your concerns while the case is going on?

No, not even the simplest of things. They keep insisting that they have addressed and remedied everything but have failed to provide any proof. Friends that I met in 2016 while still attending courses there are still stuck there hoping to get through their required courses without receiving adequate accommodations and assistance. They regularly inform me that nothing has changed.

I know the disability community wants the college to drop its appeal to the Supreme Court. How do you feel about coming to a settlement with the college?

The only settlement I will accept is for them to agree to make all digitized systems completely accessible and to create a system to mandate that all professors undergo Accessible Document Conversion training such as Ally. The district must also be mandated to hire a credentialed Adaptive Technologies and Accessibility staff member. The staff member should test all software and digitized systems for compliance and JAWS compatibility. This is something they should have done 50 years ago, instead of leaving it in the hands of people who have no experience nor credentials in Adaptive Technologies or Accessibility for persons with disabilities.

Are there other disability issues you want to influence?

Yes of course, every district should provide disability sensitivity training. This includes training maintenance and staff not to block bathroom corridors with trash cans that make it impossible for wheelchair users to get past. Ground keepers should be required to continually trim all bushes, hedges, and tree branches above six feet and away from walkways. I have grown tired of walking into bushes and tree branches that are too low and sticking out into the walking path.

All campuses should also be required to design and install clearly designated paratransit drop and pick up stalls. These are illuminated with identifying number signs that identify the pick-up location for the benefit of the person with a disability as well as to the drivers. These stalls should be designed for persons with disabilities in mind to sit. These stalls should also be wide enough to offer a wheelchair user or a person with a guide dog protection from the elements. Currently, there are no such amenities. The unjust treatment by LACCD of persons with visible disabilities is apparent enough, but their treatment of persons with nonvisible disabilities is even more egregious. All instructors should be mandated to undergo additional instructional training for teaching students with autism and other nonvisible disabilities.

How has your experience as an Apprentice empowered you to fight this case?

As an apprentice with RespectAbility, I have been exposed to several policy proposals and elected officials that have the power to impact a wide range of persons with disabilities. It has motivated and taught me to reach out to many elected officials to provide input and recommendations for policy formulation and implementation. Being able to interact with so many accomplished positive people with disabilities is very empowering and motivating. I was never quite sure that as a person with a disability I could ever reach the goals I had set for myself until I met all the people at RespectAbility. Ollie, Jennifer, Matan, and all the managers have been such positive role models and encouraged me to continue with my struggle.

Madison Essig hopes to report on disability issues or to have a job on Capitol Hill where she can advocate for disability issues. She was the first person with Down syndrome to graduate with a full diploma from the District of Columbia Public School system.