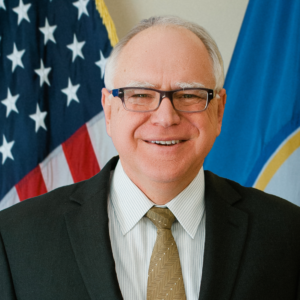 Saint Paul, Minnesota, Oct. 31 – This month, the Twin Cities Arby’s was named an Outstanding Disability Employer by the Minnesota Organization for Habilitation and Rehabilitation. This recognition happened as part of a state-wide celebration of National Disability Employment Awareness Month. Ben Kopnick, coordinator of the grant program that supported Arby’s to hire more employees with disabilities spoke about “working to integrate them in their workplace culture” and the employees with disabilities learning to “push themselves and grow their skillsets.”

Arby’s is one such example of how the North Star State is working to continue expanding job opportunities for Minnesotans with disabilities.

In a statement released earlier this month, Gov. Tim Walz proclaimed October to be “Employers Hiring People with Disabilities Month.” 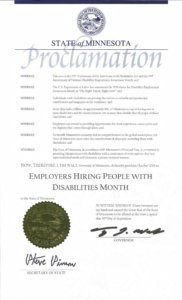 This proclamation follows a solid year of job growth among people with disabilities living in Minnesota. In 2018, 145,697 Minnesotans with disabilities had jobs putting that state’s disability employment rate at 47.8 percent. According to the Institute on Disability, that is well above the national disability employment rate of only 37 percent. That total includes people who are blind or deaf or have other visible conditions such as spinal cord injuries, as well as people with invisible disabilities including learning disabilities, mental health or Autism.

Minnesota’s tremendous outcomes are no accident. These differences are the results of deliberate strategies implemented by leaders in the community, in government and in the school system. Employment First is one such strategy. It is a strategy where critical social programs are oriented towards ensuring that getting a job is the top priority for individuals with disabilities. That goal is reinforced with high expectations among the teachers, coaches and parents.

Minnesota can further capitalize on past successes by following the example of states that show constant improvement such as Florida and Ohio. Both can attribute a portion of their growth in disability employment to Project SEARCH, a program for young adults with disabilities to improve their skills, learn from job coaches and ultimately find a job. Data shows that 70 percent of SEARCH interns who complete their training obtain competitive employment. By expanding such critical programs, Iowa can greatly increase the number of people with disabilities entering the workforce.

Next: Tennessee Gov. Bill Lee Recognizes “the Value of Employees with Disabilities.”