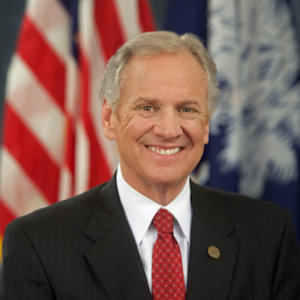 Charleston, S.C., Oct. 4 – Gov. Henry McMaster has declared October to be Disability Employment Awareness Month in South Carolina. “South Carolinians with disabilities have the same aspirations to competitively work and contribute to their communities as anyone else,” McMaster stated.

The proclamation also notes, “all people are need to reduce attitudinal and physical barriers that hinder the full acceptance of people with disabilities and their rightful place in employment.”

In closing his statement, Gov. McMaster commits to “encourage all South Carolinians to work together to advance the message that people with disabilities are equal to the task.” 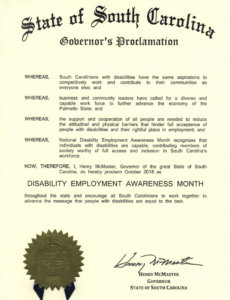 An annual celebration, National Disability Employment Awareness Month is dedicated to raising awareness about disability employment issues and celebrating the incredible contributions of people with disabilities. In total, 388,251 working-age people live with some form of disability in South Carolina. That total includes people who are blind or deaf or have other visible conditions such as spinal cord injuries, as well as people with invisible disabilities including learning disabilities, mental health or Autism.

Of that number, 129,766 have jobs. That means the Palmetto State has a disability employment rate of 33.4 percent. According to RespectAbility, a nonpartisan nonprofit organization that works to fight stigmas and advance opportunities for people with disabilities, South Carolina ranks 37th compared to the rest of the country.

Charleston, South Carolina is the home of famous coffee shop, Bitty and Beau’s, which exclusively hires people with disabilities. Owner Ben Wright told Fox News that the shop is a human rights campaign disguised as a coffee shop. The store was created as an attempt to decrease unemployment rates for people with disabilities and has been a huge success, gaining national press coverage.

Success stories like that of Bitty and Beau’s show that when people with disabilities are given access to the workforce, both the individual and the employers benefit.