Groundbreaking PSAs Enable Philanthropists to Live Up To Their Values on Diversity, Equity, Access and Equality

Ads Feature a Diverse Group of People with Disabilities

There was no script for the ads, only honest conversations with members of various disability communities. Participants in the ads include people who are deaf, blind, wheelchair-users or amputees or have Autism, learning differences or another disability. They include people who are African American, Hispanic, Latino, Asian, white and other backgrounds and are diverse in sexual orientations and identities. Participants communicate both verbally and with American Sign Language. The ads have captions, which is vital to 50 million Americans who are Deaf/Hard of Hearing.

The ads, focusing on inclusive philanthropy, along with free resources, are viewable at: www.respectability.org/inclusive-philanthropy. RespectAbility, the creator of the ads, is an education and advocacy nonprofit fighting stigmas and advancing opportunities for people with disabilities. More PSAs that focus on other disability-related topics will be released in the coming weeks. 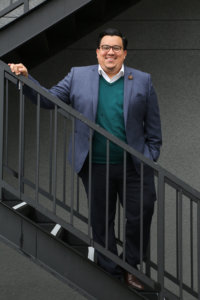 Jennifer Laszlo Mizrahi, president of RespectAbility and someone who has dyslexia and is also a philanthropist, points out in the ads that “When you look at the issues of addiction, or homelessness, or criminal justice reform, there’s generally a disability angle to the conversation.”

The purpose of this campaign is to raise awareness so that philanthropists can live their values fully.

“We offer funders and nonprofits the skills and free tools they need to welcome, respect and serve the 1-in-5 people who have a disability,” added Mizrahi. 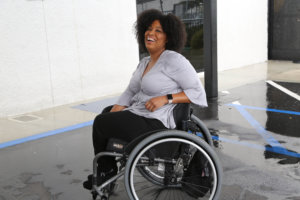 Tatiana Lee, an actress who has spina bifida

Disability also plays a role in many issues that philanthropists care about, such as criminal justice reform. Harold Foxx, an African American man who is deaf, said in the ads, “sometimes, if the police don’t know that you’re deaf, they’ll handcuff you and then you can’t sign.”

Tatiana Lee, an African American woman with spina bifida, added, “black people with disabilities are also being harassed or killed or put in jail.”

Thankfully, some philanthropic organizations recently have made major strides toward being inclusive of people with disabilities. The Ford Foundation’s work on this, led by Noorain Khan, has been transformative. Khan’s piece, Why disability rights are central to social justice work and what we are doing about it, details the Ford Foundation’s dramatic progress and commitment.

The MacArthur Foundation asked finalists for its major 100-million-dollar challenge, 100&Change, to go through a specific checklist to include people with disabilities in their work. Never before has a grant anywhere near this size asked grantees to address how they plan to assure access to services for persons with disabilities.

RespectAbility’s PSAs were created to encourage other philanthropic organizations to follow the best practices set by The Ford Foundation and The MacArthur Foundation, as well as other inclusive organizations such as the Jewish Federation of Greater Washington and J.P. Morgan Chase’s philanthropic arm. 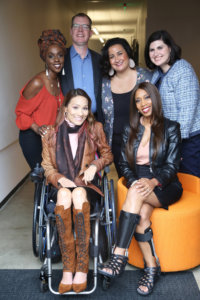 The creation of these groundbreaking PSAs required the help of many talented individuals who deserve recognition. RespectAbility board member and reality TV pioneer Jonathan Murray shot the PSAs at his studio in California. The PSAs used the same set and team who created the Emmy-winning series Born This Way, which stars seven young adults with Down syndrome.

Cliff Pintak of TenCAPITOL edited this series of PSAs, and we are extremely grateful for his time and expertise. TenCAPITOL is a top strategic communications company located in Virginia. RespectAbility would like to thank Gail Williamson of Kazarian/Measures/Ruskin & Associates for her assistance in recruiting talent for these PSAs. RespectAbility would especially like to thank the outstanding people with disabilities who volunteered their time to tell their stories to the world. These groundbreaking PSAs would not exist without their help. The stars of the PSAs are:

Transcript of the Full Version of the Philanthropy PSA

Tatiana Lee: I was born with a birth defect called Spina Bifida.
Stephanie Thomas: I am a congenital amputee.
Coby Bird: I have autism.
Tatiana Lee: I use a wheelchair.
Lee Pugsley: I’m legally blind.
Andrea Jennings: I have a traumatic brain injury.
Jennifer Laszlo Mizrahi: I’m dyslexic.
Maria Perez: I have a couple of disabilities.
Lathan Krup: I have autism.
Kewon Vines: I’m a little person.
John Lawson: I’m an upper extremity double amputee, which is politically correct for “look ma, no hands.”
Tatiana Lee: Disability comes in so many shapes and so many different nationalities and backgrounds and demographics.
Lee Pugsley: A lot of people, or a fair amount of people that have various disabilities that in school it was a challenge for them.
Steven James Tingus: I saw in my classrooms children, students with hidden disabilities.
Jennifer Laszlo Mizrahi: Only 65% of youth with disabilities graduate high school.
Maria Perez: A lot of educators they let them just you know coast.
Delbert Whetter: And as a parent who are educators, I think it’s important to challenge children and have those high expectations. Sometimes children aren’t meeting their expectations and sometimes you just have to raise them.
Lauren Appelbaum: It’s really important that people with disabilities don’t fall off the cliff.
Allison Cameron Gray: I’m going to college; I’m smart and capable of doing the work.
Jose Plaza: We look at immigration status, we look at gender, gender expression, but disability’s always left out of the conversation.
Angela Rockwood: Disability is also like being a minority, like being Asian American, it’s another battle that I have to face.
Kurt Yaeger: People with disabilities are problem solvers.
Lathan Krup: My autism allows me to build Legos faster than people usually could.
John Lawson: I’m a scuba diving instructor.
Angela Rockwood: I’m a rolling empire.
Stephanie Thomas: Dress management.
Michael Aquila: I finish my work on time.
Coby Bird: I’m more than autism.
Jose Plaza: It’s something that will impact communities and individuals regardless of race, regardless of income.
Eileen Grubba: I have been in and out of a wheelchair. There’s nothing worse than coming into a room for a job that could change your life and having people go…
Stephanie Thomas: People are just uncomfortable with what is not considered the norm.
Jennifer Laszlo Mizrahi: When you look at the issues of addiction, or homelessness, or criminal justice reform, there’s generally a disability angle to the conversation.
Harold Foxx: Sometimes, if the police don’t know that you’re deaf, they’ll handcuff you and then you can’t sign.
Tatiana Lee: Black people with disabilities are being also harassed or killed or put in jail.
Jose Plaza: There’s a difference within philanthropies in terms of their mission. Some are focused on education, some are focused on labor, some are focused on racial disparity. Disability is always left out. Disability needs to be front and center.
Stephanie Thomas: Respect
Michael Aquila: Respect
Andrea Jennings: Respect
Steven James Tingus: Respect
Stephanie Thomas: Ability
Angela Rockwood: Respect Ability
Michael Aquila: Ability
Leo and Lathan Krup (simultaneously): Respect Ability
Coby Bird and Kewon Vines (simultaneously): Respect Ability