National Numbers Improve: Spotlight on WI as 4,327 more Wisconsinites with disabilities get jobs, earn an income and become independent 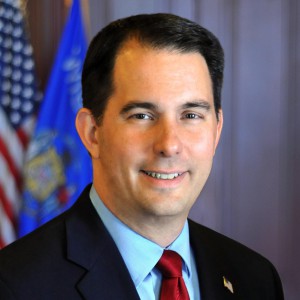 Wisconsin is at the forefront of nationwide gains in terms of disability employment. In a new report published by the Kessler Foundation and the University of New Hampshire’s Institute on Disability (UNH-IOD), people with disabilities have experienced a solid year of job growth.

According to UNH Prof. Andrew Houtenville, “The employment gains by people with disabilities continue to outpace those of people without disabilities.”

Gov. Walker will visit the HSHS St. Vincent Hospital in Green Bay, the Aspirus Riverview Hospital in Wisconsin Rapids and then the Mayo Clinic in Eau Claire. At each of these sites, the lives of young people with disabilities are being transformed by the opportunity to work in a competitive setting and to gain critical life skills.

Another great example of a state leading on these issues is Pennsylvania where Gov. Tom Wolf has made jobs for people with disabilities a key part of the Commonwealth’s workforce development strategies. As reported by RespectAbility, Pennsylvania outpaced bigger states like Texas and California in terms of getting working age people with disabilities into the workforce.

In his Monday visits, Gov. Walker will see a Project SEARCH site as it trains youth with a wide range of disabilities practical job skills that will fully prepare them for careers in fields such as healthcare and eldercare. Project SEARCH is a school-to-work transition program that empowers young people with intellectual and developmental disabilities to successfully transition from the classroom and into the world of work. Without this type of support, young people with disabilities face incredible challenges entering the workforce and earning an income. In fact, those with intellectual and development disabilities face only a 20 percent employment outcome without transition services. Instead, Project SEARCH has a 70 percent employment outcome meaning that seven out of ten participants gain a job and set themselves on a path toward success.

“People with disabilities bring unique characteristics and talents to workplaces that benefit employers and organizations,” said Philip Pauli, Policy Director for RespectAbility. “As demonstrated by the success of Project SEARCH, people with disabilities can work in hospitals, hotels and elder care. We also have seen that they be super talents in developing computer software and in many other fields.”

Gov. Walker has spoken about the importance of jobs for people with disabilities both in Wisconsin through regular visits to inclusive employers and in Washington, D.C. In February, speaking at the Washington Post, he made it clear that one of his budget priorities for 2017 was to “help people with disabilities who overwhelmingly want to work” find jobs and apply those lessons to “go beyond traditional welfare reform.”

Project SEARCH is not the only program Wisconsin has invested in.

“Wisconsin has made particular progress in getting youth with disabilities into jobs through efforts like Wisconsin PROMISE, BPDD’s Let’s Get to Work employment grant, and Project SEARCH,” said Beth Swedeen, Executive Director of the Board for People with Developmental Disabilities (BPDD). “The research is clear that early investment in paid job experiences while youth are still in high school more than doubles the chance a student with disabilities will go onto permanent employment as an adult.”

“At the end of the day, our nation was founded on the principle that anyone who works hard should be able to get ahead in life,” Mizrahi said “People with disabilities deserve the opportunity to earn an income and achieve independence, just like anyone else.”

President Trump himself spoke about ensuring that “every single American will have the opportunity to realize his or her fullest potential” and that “millions lifted from welfare to work is not too much to expect.”

Mizrahi expressed her deepest hopes that as the economy continues to grow, that the new administration will make jobs and independence for people with disabilities a high priority.

For more information, or to conduct an interview with one of RespectAbility’s policy experts, contact Jennifer Laszlo Mizrahi at 202-365-0787 or [email protected] or Philip Pauli at [email protected].

Previous: WEBINAR: Sexual Violence and People with Disabilities-Lessons on Prevention, Protection and Survival from RAINN

Next: WEBINAR: Youth with Disabilities, Training and Employment Success-Lessons on Best Practices from Project SEARCH