Fully one-in-five Americans have a disability themselves and studies show that most of them want to work. People with disabilities are America’s largest minority group, and the only one that, due to an accident or illness, anyone can join at any time. Indeed, America has 56 million people with disabilities, more than 20 million of whom are working age.

“Issues of employment among people with disabilities can affect outcomes in competitive races,” Democratic pollster Stan Greenberg, PhD, said in a statement following a bipartisan poll of voters. “This community is far bigger than many people realize, including people in my profession.” 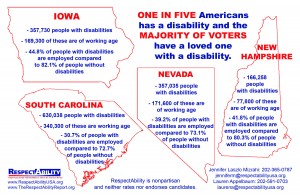 One in five Americans has a disability

The bipartisan poll “shows that Americans with disabilities – and those who care deeply about them – are a demographic we need to pay attention to in the future,” Republican pollster Whit Ayres said in a statement.

The early primary states bear out that need.

As the 2016 presidential campaign season gains speed, the nonprofit, non-partisan disability organization RespectAbility is reaching out to all of the campaigns to highlight the importance for all candidates to speak directly to voters with disabilities and their families by offering specific plans for a better future. Already Jeb Bush, John Kasich, Bernie Sanders and Scott Walker have spoken publicly about these issues.

The RespectAbility Report was launched in June of 2015. It offers nonpartisan political commentary on the 2016 U.S. elections with a focus on disability issues. It neither rates nor endorses candidates, but is being watched very carefully by voters with disabilities and their loved ones. Expect to read fact-based updates and analysis from our staff based around the entire country. Staff writers are meeting with the presidential candidates and reporting on their proposals on disability issues.

RespectAbility, a nonprofit organization working to empower people with disabilities to achieve the American Dream by entering the workforce, is nonpartisan and neither rates nor endorses candidates. Read The RespectAbility Report: http://therespectabilityreport.org/.

Previous: How to Get Winning Op-Eds and Press Attention on Jobs for People with Disabilities