Never Forget. Live every day to make a difference.

Today is a somber day. It’s Holocaust memorial day. I am so deeply grateful that my father was able to escape the Nazis in 1939. Most of our family on his side was not so lucky. They were killed. I am so grateful to the many allied troops and others who made freedom and survival possible. Without them the world would be a different place. May the memory of all who died be a blessing, may the lessons of that terrible time never be forgotten. 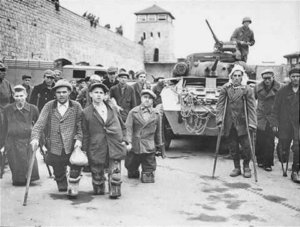 The Third Reich also stepped up its propaganda against people with disabilities, regularly labeling them “life unworthy of life” or “useless eaters” and highlighting their burden upon society.

Six million Jews were killed. People with disabilities were also targeted. The German government instituted the “Law for the Prevention of Progeny with Hereditary Diseases.” This law called for the sterilization of all persons who suffered from diseases considered hereditary, including mental illness, learning disabilities, physical deformity, epilepsy, blindness, deafness and severe alcoholism. With the law’s passage the Third Reich also stepped up its propaganda against people with disabilities, regularly labeling them “life unworthy of life” or “useless eaters” and highlighting their burden upon society.

On August 18, 1939, the Reich Ministry of the Interior circulated a decree compelling all physicians, nurses, and midwives to report newborn infants and children under the age of three who showed signs of severe mental or physical disability. At first only infants and toddlers were incorporated in the effort, but eventually juveniles up to 17 years of age also were killed. Conservative estimates suggest that at least 5,000 physically and mentally disabled children were murdered through starvation or lethal overdose of medication. Many more were killed in death camps. You can read about it on the website of the Holocaust museum.

At RespectAbility we work for the dignity of people with ALL abilities. We work to make our communities — both inside an out of the Jewish community — welcoming and respectful places for all.

I want to thank you for being our partner in this work. Never forget. Count our blessings. Live every day knowing that ALL of us matter.

To contribute to our work please do so on our website.

Next: Building a Better Baltimore and Beyond