These Jews feel strongly about inclusion of people with disabilities, even more so than Israel, Jewish life, marrying Jewish, or having Jewish kids

Bethesda, MD. In a new poll of 2607 Jews done for RespectAbilityUSA.org and Jerusalem U, data shows that the Jews polled, including young Jews, felt very strongly about inclusion of Jews with disabilities. Indeed, they feel even more strongly about inclusion of people with disabilities in Jewish life than they feel about being connecting to Israel, marrying Jewish or having Jewish children, although they were strong on these issues as well. The sample is more likely to be of Jews who are somehow engaged in the community than in a random sample. However, because the sample size is so large, the differences between age groups and other key demographics are valid and pronounced.  CLICK HERE FOR THE POWERPOINT OF THE RESULTS.

Fully 89% of the Jews polled strongly agree that, “Jewish events and organizations should be as welcoming and inclusive of people with disabilities as everyone else.”  An additional 9% somewhat agree with the same statement and less than 2% disagree or are unsure.

The intensity of agreement with this statement is noteworthy especially when compared to other statements included in the poll. The gaps in intensity were even more pronounced amongst young Jews. 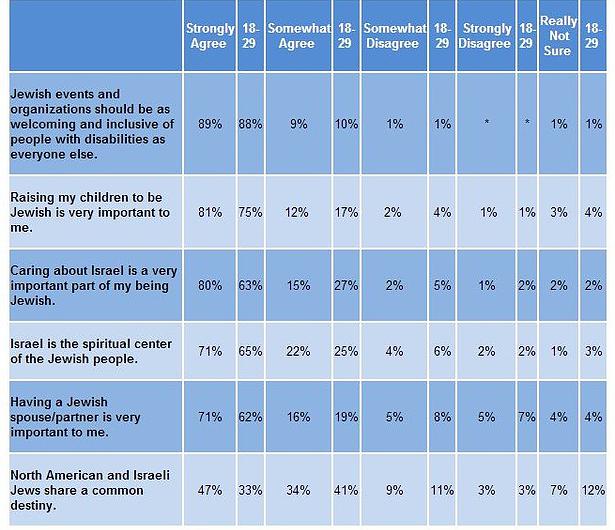 There are 2607 Jews in the sample. Amongst them 223 people (8.6%) reported having a disability and 594 (22.8% of the sample) reported either having a family member or close friend with a disability. According to the US Census, 18.6% of Americans have a disability.  This includes an expected rate of 10% of Americans ages 15-25 (see pages 5 and 6). There has never been a census specifically of Jews on these issues. However, we do know that Jews marry and have children later than any other American group. It is also a medical fact that having children when you are older leads to higher rates of having children with disabilities such as Down syndrome, Autism and schizophrenia. Indeed, in the event of older fathers, the rate of Autism has been shown to be five times higher than with younger fathers. Medical reports also indicate that older parents can cause even their grandchildren to have a higher incidence rate of disabilities. When you combine these facts, it is quite possible that Jews have a higher percentage of disabilities in their families than in the general population.

Additionally, a national phone survey done separately showed that 51% of likely voters either have a disability or a family member or close friend with a disability.

Donn Weinberg, chair of RespectAbilityUSA, commented, “As a national nonprofit, non-partisan organization, we are working to empower more Americans with disabilities to achieve the American dream. A key part of the American dream is that all men are created equal and that there should be freedom of religion for all faiths. We want all faith groups to be inclusive of people with disabilities. It is clear from this data that even inside my own faith community we have work to do to so that people with disabilities can and will more fully participate.”

Professor Steve Eidelman, a leading disability expert and member of RespectAbilityUSA’s board of advisors said, “While it is wonderful for so many Jews to say they value inclusion of people with disabilities so highly, there is a great distance between the words and deeds in our community. That is why the first Jewish Leadership Institute on Disability and Inclusion will be held in Baltimore in December 2013. We hope that leaders of Jewish institutions from around the world will attend so that in the future our events and institutions can truly reflect the inclusive attitudes valued so highly by our community. After all, with Jewish survival being so important, our community needs the personal involvement of all Jews – no matter their abilities and differences.”

Shelley Cohen, co-founder of RespectAbilityUSA and president of the Jewish Inclusion Project said: “When a Jewish family is told that their child cannot attend a Jewish day school, camp or other program because they have a disability, the community risks losing the entire Jewish family to participation. This poll data shows that individuals in our community value inclusion above all else – yet we know we are not yet delivering it in our institutions.”

Rabbi Raphael Shore, founder of Jerusalem U, “It is incredibly important for the Jewish people that Jews with disabilities be fully included in our rosters of Jewish life. More needs to be done to ensure this is the case. All of us are equal in G-ds eyes. Everyone — no matter our different abilities — should be welcomed and included. With Jerusalem U, because our films and educational experiences are available on the Internet, and YouTube offers captions, we are already accessible to most Jews with disabilities. ”

Amy Holtz, president of Jerusalem U, “It is exciting to see that young Jews value inclusion of Jews with disabilities into the fabric of Jewish life. Our mission is to create proud Jews  — and that goes for people with all abilities.  Faith, culture and religion are important to us all.”

The poll is not a random sample, as the survey was done online and lists which were emailed the survey included people involved in JerusalemU and other organizations, subscribers to the Jerusalem Post and/or Haaretz, plus reaching out via facebook and twitter. All individuals were encouraged to complete the survey to be entered to win $500 to go to a charity of their choosing.  Young Jews were also given an opportunity to win $500.

The push to reach out to Jews with disabilities to encourage them to take the poll was broad. The New Normal, a blog for Jews who care about disability issues done through the New York Jewish Week, encouraged participation. Attendees from Jewish conferences on disability inclusion were emailed invitations to participate. Groups such at Gateways in Boston, Jewish Family Service in Houston, the Tikvah program at Ramah camp and others encouraged their participants with disabilities and their family members to fill out the survey. Parents and caretakers of people with disabilities were available to assist Jews who had intellectual disabilities in filling out the survey. Nonetheless, these programs and lists are relatively small and even the intense push did not make up the gap.
The results were less than half that of the disability rate in the census, and indeed, the people with disabilities in the sample tended to be senior citizens, thus suggesting that they might have acquired disabilities as opposed to life-long difference.