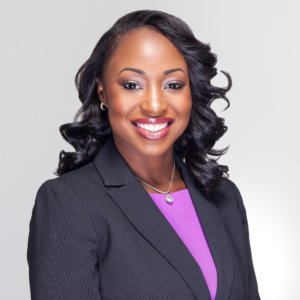 Courtney A. Munnings, a native of Springfield, Massachusetts, is a practice trial and dispute resolution attorney at a national law firm. She is an advocate for diversity and inclusion in the legal profession, and has served for five years as a member of the Barristers’ Association of Philadelphia, Inc.’s Executive Board helping address the professional needs and development of Black lawyers in the Philadelphia area while participating in various community service projects.

Courtney studied Spanish Language and Literature, and completed Temple University’s Honors Program while working as a makeup artist in Cherry Hill, New Jersey. In 2011, she enrolled in law school at Rutgers School of Law in Camden, New Jersey. At Rutgers, Courtney served as Treasurer and Community Service Chair of the Black Law Students Association, competed in the Thurgood Marshall Mock Trial Competition, and served as a Marshall-Brennan Constitutional Literacy Project Fellow. Courtney was chosen for the Leadership Council on Legal Diversity’s 2017 Pathfinder Program.

Courtney is autistic with sociability, learning, attention, and mood differences and is committed to neurodiversity and advocating for the rights, participation, and inclusion of people with disabilities.