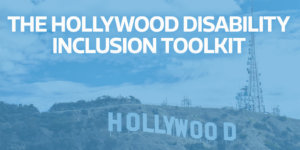 Entertainment professionals across all platforms are working to become more inclusive of minorities. This is our opportunity to ensure inclusion and equality for all people – including America’s largest minority – the one-in-five Americans with a disability. Opening the inclusion umbrella is the right thing to do as well as economically smart given that the disability market is valued at more than $1 trillion. Yet the disability community often is forgotten in inclusion and diversity conversations. The lack of representation – just 3.1 percent on screen of scripted television characters (27) and even less in children’s television (less than one percent) – means that millions of people are unable to see themselves in media today. Furthermore, actors without disabilities play more than 95 percent of all characters with disabilities on television.

The representation that does exist is misleading. Almost all portrayals of people with disabilities in media are white, but disability impacts all. Anyone can join the disability community at any point and people with disabilities come from all communities – including African American, Asian, Hispanic, Native American, LGBTQ and other communities. According to a recent report by The Media, Diversity, & Social Change (MDSC) Initiative at USC’s Annenberg School for Communication and Journalism, only 2.7 percent of all speaking or named characters in film were shown to have a disability in 2016 (up from 2.4 percent in 2015). None of the leading characters were from an underrepresented racial/ethnic group or the LGBTQ community. “The results of this analysis on characters with disabilities reveal clear discrepancies between the real world and the ‘reel world,’” the report says. “Stories that reflect the full lives of characters with disabilities and the demographic diversity of this community remain elusive in film.”

Audio Description, also known as Descriptive Audio or Video Description, narrates the relevant visual information contained in a video and is an accommodation for blind and low-vision viewers. These descriptions fit into natural pauses in the video’s audio track to provide context, to clarify speakers, and to articulate visual elements that are critical to gain a comprehensive understanding of the video.

Closed captioning and subtitling are both processes of displaying the audio portion of a television program or video as text on the screen or other visual display, providing a critical link to news, entertainment and information for individuals who are deaf or hard-of-hearing.

The world of entertainment is a small one. Projects are produced for audiences worldwide and communication is essential for success. Interpreting in the theatre, television or film industry requires knowledge of Sign Language and knowledge of the industry. When hiring an interpreter through a service, be sure to let them know it is for an entertainment industry event.

Hiring People with Disabilities Behind The Scenes

Companies including Comcast NBCUniversal, IBM, JP Morgan Chase, Microsoft, UPS, Pepsi, Starbucks, Walgreens and others have shown that employees with disabilities are loyal, successful and help them make more money. That’s because people with disabilities bring unique characteristics, talents, innovations and loyalty to the workplace that benefit employers and organizations. If we find the right jobs for the right people, it can and does increase the bottom line of companies. People with disabilities can work in any field; television shows and films should reflect this.

Consortium for Citizens With Disabilities

The Consortium for Citizens with Disabilities (CCD), headquartered in Washington D.C., is the largest coalition of national organizations working together to advocate for federal public policy that ensures the self-determination, independence, empowerment, integration and inclusion of children and adults with disabilities in all aspects of society. Since 1973, CCD has advocated on behalf of people of all ages with physical and mental disabilities and their families. CCD has worked to achieve federal legislation and regulations that assure that the 54 million children and adults with disabilities are fully integrated into the mainstream of society. There are more than 100 CCD member organizations.

Do you know other people or organizations that should be included as a resource?

More Resources You Can Use