Action Sports Star/Host of The Challenge TJ Lavin Stars in New PSA on disability: “We all should have the same opportunity to achieve the American dream.”

Washington, D.C. – With fully 70 percent of working-age Americans with disabilities outside the workforce, BMX bike legend and host of MTV’s The Challenge, T.J. Lavin, is starring in a new public service ad where he says, “whether it is me, you, or someone who just wants to work — we all should have the same opportunity to achieve the American dream.”

END_OF_DOCUMENT_TOKEN_TO_BE_REPLACED

Washington, D.C. – As the National Governor’s Association (NGA) begins its meeting in Washington, many of the nation’s governors are making dramatic, positive changes to expand job opportunities and avenues for success for people with disabilities.  The changes are an outgrowth of the NGA Chairs’ Initiative, “A Better Bottom Line: Employing People with Disabilities” led by previous NGA Chairman, Gov. Jack Markell (DE). The initiative created a blueprint that identified best practices and outlined steps that can be put in place by businesses and states to increase employment of people with disabilities.

END_OF_DOCUMENT_TOKEN_TO_BE_REPLACED

Washington, DC. With fully 70% of working age Americans with disabilities outside the workforce, BMX bike legend and host of MTV’s The Challenge, T.J. Lavin, Governor Jack Markell (DE), Rep. Pete Sessions (TX), Rep. Brad Sherman (CA) and Paralympian Matt Cowdrey joined together to meet with dozens of Capitol Hill professionals. The group could not be farther apart geographically or ideologically, but share a commitment to improving opportunities for people with disabilities.  At the well-attended hill event on Wednesday, they voiced their experience and discussed policies and attitudes that are necessary to empower PwDs to achieve the American Dream.

END_OF_DOCUMENT_TOKEN_TO_BE_REPLACED

New Poll of Faith in the Disability Community Released

(Washington, D.C.) Faith questions from a groundbreaking new poll of 3839 members of the disability community were released today by RespectAbilityUSA, a non-profit organization working to enable people with disabilities to have the opportunity to achieve the American dream.  END_OF_DOCUMENT_TOKEN_TO_BE_REPLACED

10 Tips to Enable People with Disabilities to Get Jobs

RespectAbilityUSA.org knows that you want to be in touch with voters and meet their needs so that America can be a better place. Thus, we want to help you serve your constituents better. We recently completed a large-sample national poll of 3800 people within the disability community, and the results offer a unique insight into a community of 56 million Americans. We know that this information can help you who understand what matters to millions of Americans with disabilities and their loved ones.  END_OF_DOCUMENT_TOKEN_TO_BE_REPLACED

Governor McCrory (NC) intends to improve the employment outlook for those with disabilities. He signed a resolution proclaiming the observance of October 2013 as “Disability Employment Awareness Month.” 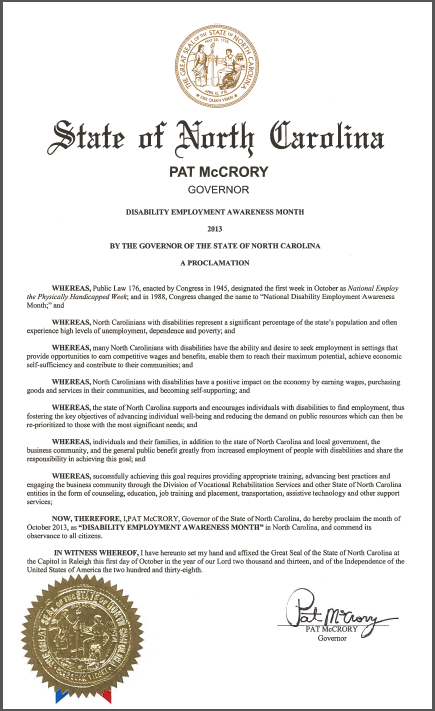 These Jews feel strongly about inclusion of people with disabilities, even more so than Israel, Jewish life, marrying Jewish, or having Jewish kids

Bethesda, MD. In a new poll of 2607 Jews done for RespectAbilityUSA.org and Jerusalem U, data shows that the Jews polled, including young Jews, felt very strongly about inclusion of Jews with disabilities. Indeed, they feel even more strongly about inclusion of people with disabilities in Jewish life than they feel about being connecting to Israel, marrying Jewish or having Jewish children, although they were strong on these issues as well. The sample is more likely to be of Jews who are somehow engaged in the community than in a random sample. However, because the sample size is so large, the differences between age groups and other key demographics are valid and pronounced.  CLICK HERE FOR THE POWERPOINT OF THE RESULTS.

Fully 89% of the Jews polled strongly agree that, “Jewish events and organizations should be as welcoming and inclusive of people with disabilities as everyone else.”  An additional 9% somewhat agree with the same statement and less than 2% disagree or are unsure.