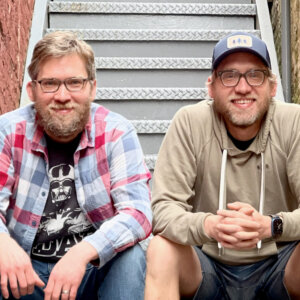 Chris and Charlie Frazier have written for both television and film for ten years. They got their start in 2012 after selling their pilot FLINCH to USA Network. They have since developed both television and features with MGM, Warner Brothers, and Fox, among others. Most recently, they wrote RADICAL, a biopic about Japanese American activist Yuri Kochiyama for Significant Pictures, with Nina Yang Bongiovi and Lisa Ling producing.

Chris and Charlie have Cystic Fibrosis, and their experiences navigating family, disability access, and activism shape the stories they choose to tell.

Charlie has a BA in History and a Masters in Education from the University of North Carolina. He currently resides in Chapel Hill, North Carolina with his partner and children.

Chris attended undergrad at the University of Maryland, and received his MFA in Screenwriting from Chapman University. He lives in Boulder, Colorado with his partner, daughter, trans-daughter and two sons.

Previous: Launch Talks: The Making Of Queer As Folk