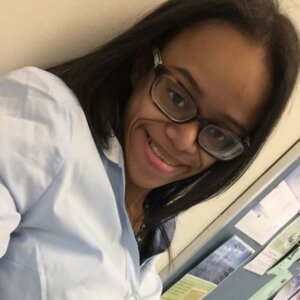 Ashley Merlanie Castillo is a Communications Apprentice in RespectAbility’s National Leadership Program for Fall 2022. RespectAbility is a national nonprofit organization fighting stigmas and advancing opportunities so that people with disabilities can fully participate in all aspects of community.

Castillo is a disabled Latina/Hispanic journalist with cerebral palsy. Her passion for journalism began at a young age when her mother introduced her to Spanish language news broadcasts. An English language learner at school, she realized that watching the news at home allowed her to continue to learn and grasp Spanish. She especially enjoyed the entertainment and gossip news hour because she loved hearing about current events and the latest news in the entertainment business. She also noticed that Spanish language broadcasts covered more stories about disabled people like herself.

Castillo later attended an entertainment newscast taping and was impressed by the host’s interaction with the audience. After these experiences, she dreamed of a career in journalism, yet she told no one because she was worried about limitations others had given her. Instead, she followed her high school mentors’ advice and went to college to become a secretary. The whole time, she knew there were other options that would suit her better, but she wasn’t sure which career direction she should take.

While watching the Latin Grammys with her mother, Castillo realized she wanted to be asking questions like the journalists on the red carpet. Soon after, she changed her major to media studies. In college, she won a speech and debate competition award for a persuasive speech on disability and bullying in school environments.

In 2020, she became vocal about her disability and ensuring that the disability community gets the attention it deserves. During her time at RespectAbility, she hopes to learn how to advocate to the best of her ability using her journalism skills. She also hopes to learn to be a great storyteller and come closer to her dream of being a Spanish language news anchor and making her role models proud.

Ashley Merlanie Castillo is a Communications Apprentice in RespectAbility’s National Leadership Program for Fall 2022. She is a disabled Latina/Hispanic journalist with cerebral palsy. In college, she won a speech and debate competition award for a persuasive speech on disability and bullying in school environments.