Do Justice, Love Kindness, and Look Out the Window!

What does the Lord require of you but to do justice, and to love kindness, and to walk humbly with your God. Micah 6:8. 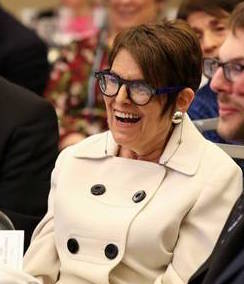 The Talmud [Berachot 34b] teaches that one must pray in a house with windows so they can see the heavens and focus their heart. Rabbi Lynne Landsberg, of blessed memory, was the Senior Advisor on Disability Rights at the Religious Action Center for Reform Judaism (RAC). As a passionate advocate for disability rights, she wrote, “the Talmud teaches us that a synagogue must be built with windows in the sanctuary. I believe this is so we can see who is outside and unable to join us.”

Thirty-two years ago, on July 26, 1990, the Americans with Disabilities Act (ADA) was signed into law by President George H.W. Bush. The ADA is a comprehensive federal civil rights statute that protects the rights of people with disabilities, entitling over 56 million Americans with disabilities to equal opportunities as full citizens of the United States. The ADA is landmark legislation for many people who, prior to its passage, couldn’t cross the street in their wheelchair, use the restroom in public buildings, or ride public transportation.

While in most cases the ADA does not legally mandate inclusion in faith institutions, the ADA can serve as a moral mandate for faith communities to draw upon. The regulations offer specific guidance on how to improve access to buildings and grounds as well as how to make programs and employment opportunities accessible to people with disabilities.

And the ADA does not stand alone as a moral mandate. Biblical texts can provide another kind of guidance, one that opens hearts as well as minds, causing us to question attitudes and beliefs about how people with disabilities are regarded, treated, and valued. Throughout the Tanakh (Hebrew Bible), we encounter people with lived experiences of disability. Moses, who lived with a speech disability, was appointed by God to advocate for freedom for the Israelites from the Egyptians. He lead them to the land God promised to Abraham. When Moses resisted taking on this enormous responsibility because of his speech disability, God provided the first known accommodation, Aaron, to be Moses’ voice. The legacy of Moses is to ensure that all people are accepted, included, and supported in religious and spiritual community.

In 2020, the pandemic shut down in-person gatherings in many religious organizations. Churches, synagogues, mosques, temples, and other religious entities were challenged to find ways for people to access their offerings.

Zoom became the platform for many virtual sanctuaries and gathering places. Adjacent technologies such as live captioning became exceedingly important for accessibility. Despite the exemption from the ADA, faith communities created reasonable accommodations in the form of universal design by opening virtual doors to participation. They offered opportunities to practice one’s religion, engage spirituality in community, and feel a sense of belonging. On Zoom, our sanctuaries were actual windows. We saw faces and names.

Now, houses of worship and religious organizations must maintain accessibility as they return in-person. The invitation to belong was issued and accepted, and there are no takebacks.

Rabbi Landsberg, who championed inclusion and access, implored houses of worship to ask themselves if they are doing all they can to ensure that people with disabilities have access to all aspects of faith community life. She wrote, “the ADA mandates access to public buildings but, as I have long said, it cannot mandate access to the human heart.” In the disability rights community, the old saying goes, “before ramping buildings, you have to ramp attitudes.”

Although Americans celebrate the 32nd anniversary of the ADA on July 26, there is still significant work to be done. Disabled people of faith and those who love them require more than open sanctuary windows to feel they belong. In the spirit of the law, we can turn good intentions into actions that open doors and create attitudinal changes.

Shelly Christensen is the Senior Director of Faith Inclusion and Belonging at RespectAbility.

Previous: 32 Years After the ADA, People with Disabilities Still Are Left Behind in Faith Institutions

Next: Financial Security for New Workers with Disabilities: Understanding ABLE Today and Future Opportunities for Advancement