Survey of 192 Jews in the Houston community shows progress, while identifying areas in need of continued improvement 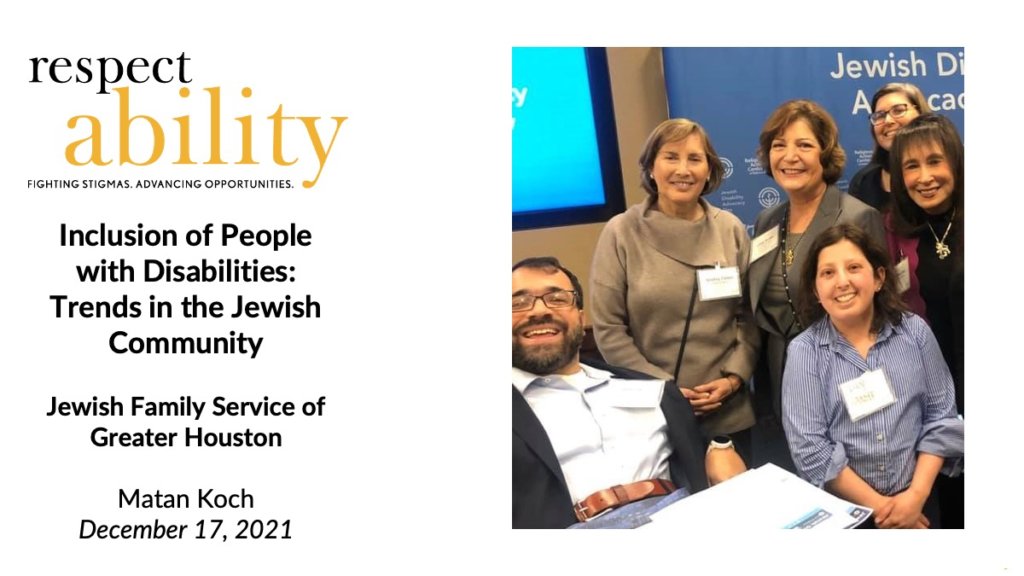 Houston, TX, Dec. 23 – In a recently released major survey of 2,321 Jewish individuals nationwide, RespectAbility, a nonprofit organization that fights stigmas and advances opportunities so people with disabilities can participate fully in all aspects of community, in partnership with JFS Houston, surveyed 192 members of the Houston Jewish community. This allowed a deep look into disability inclusion in Houston, as well as a strong and meaningful comparison to the national numbers. Of the 192 respondents, 160 either personally have a disability or have a close disability connection. The survey demonstrates that Jewish communal organizations are making strong progress toward building a more inclusive community for people with physical, sensory, mental health and other disabilities.

The data showed that 67 percent of Houston Jewish respondents felt the Jewish community was “better” at “including people with disabilities” compared to five years ago. Not a single respondent felt that the community was doing “worse.”

“More and more Jewish institutions now understand that we are a stronger community when we are welcoming, diverse, and respect one another,” said RespectAbility VP Matan Koch, who traveled to Houston to brief Jewish leaders on the results. “The numbers in Houston show the results of strong leadership, values and practices in the Jewish community.”

Koch, a wheelchair user himself, continued, “The survey findings were very encouraging, demonstrating the Jewish community is headed in the right direction. It’s important to celebrate this memorable improvement, and the hard work of so many people that made it possible, without losing sight of the much more work clearly to be done. It is especially important to note the data shows that even though Jews with disabilities are as highly educated as Jews without disabilities, they are considerably more likely to live in poverty.”

When Jews in Houston were asked “overall, how well is the Jewish community doing at including people with disabilities in synagogues, Jewish organizations, and communal activities,” encouragingly, 40 percent of respondents answered “extremely or very well”, nearly 10 percentage points higher than the national average. Additionally, 37 percent felt the Jewish community was doing “somewhat well.”

When asked, “in the faith-based institutions and groups that you are active in, do you feel that people with disabilities are included? (i.e. social activities, men’s clubs/sisterhoods, youth groups),” 39 percent answered “yes,” with an additional 36 percent responding “sometimes.”

“The survey findings were encouraging, showing that the Jewish community is headed in the right direction to be more inclusive of people with disabilities,” said pollster Meagan Buren, who fielded the survey. “However, more work must be done to ensure all members of our community feel respected, included, and valued.”

When asked where the community found the “most access and inclusive environment” and where they found the “most challenges for access and inclusion” of people with disabilities, the largest response nationally was the same for both questions – synagogues. 21 percent said synagogues have the most access while 18 percent said synagogues have the most challenges. This follows multiple efforts to expand inclusion at synagogues and demonstrates the inconsistencies in disability inclusion among varied institutions.

In Houston, only 10 percent responded that synagogues have the most challenges. Interestingly, the largest response for “most access” in Houston was “Jewish Human Services Organizations” versus 14 percent nationally. And fully, 57 percent of Houston respondents chose “I don’t know” in response to where the most challenges are in the community. In a sample made up largely of people with a disability connection, it is of note that nearly 6 out of 10 did not know of a challenging place for access and inclusion of people with disabilities in the Houston Jewish community.

Linda L. Burger, CEO of Jewish Family Service Houston, the community’s most active direct service provider to individuals with disabilities, remarked: “At JFS Houston, we want those we serve and others like them to have a place at the table in the Jewish community. Our JFS Alexander Institute for Inclusion continually works to open doors wider for people with disabilities to participate in programs and spiritual life. We hope and believe that our advocacy work to increase awareness of their needs and their huge potential for enriching our community is part of the reason that the respondents reported so favorably. Of course, there is still much work to do, and we are grateful for our communal partners who have embraced inclusion as a value.”

A strong majority of Houston Jewish respondents (61 percent) are involved in faith organizations that have made commitments to “diversity, equity, and inclusion” and among those, fully 95 percent included disability in specifically named areas of diversity, a significant achievement.

At the same time, the surge in the use of virtual formats in response to the COVID-19 pandemic increased the ability of 69 percent of Houston’s Jewish respondents to access their faith community. This likely resulted from a combination of the relative ease with which more people could be included. For example, live captioning and remote ASL interpreters made it easier for those who are deaf or hard of hearing to participate. Furthermore, the lack of a need for transportation, which remains a major barrier for many with physical, visual, intellectual and/or psychiatric disabilities, enabled additional individuals to participate from home.

While the overall numbers are trending in a positive direction and are strong compared even to three years ago, there still is exclusion in the Jewish community. Nationally, one in five people with disabilities noted they or another disabled individual in their household have been “turned away from an activity at an organization in your faith community because of its inability or unwillingness to make a reasonable accommodation.” In Houston, that number is roughly one in ten.

The professional picture is more varied. RespectAbility’s survey shows that disability representation in Jewish leadership continues to be an area of opportunity. Houston’s Jewish respondents were in line with the national average at 14 percent who knew “any clergy or staff with disabilities” at their own institutions. However, only 13 percent feel that “people with disabilities are encouraged to serve on boards and committees,” with an additional 18 percent responding “sometimes.”

The RespectAbility study showed that 37 percent of Houston Jewish respondents believe that “prejudice and unacknowledged stigma” remains the biggest barrier to full inclusion, just as it was in 2018.

Previous: Advocacy Burnout: What Is It & How Do We Avoid It?

Next: Building an Equitable Recovery: RespectAbility Advises Connecticut on Solutions for People with Disabilities