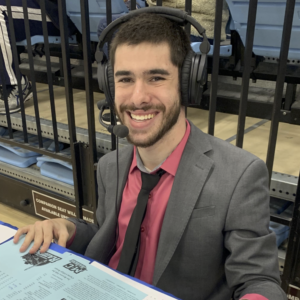 Justin Borses is a 21-year-old “valley kid from California” who lives with Cerebral Palsy. Currently, he is a student at California State University at Northridge (CSUN), majoring in broadcasting and journalism, but he’s secretly a theatre kid at heart. Justin is a major extrovert and thrives on conversation and interaction with others, which makes his job as a sports broadcaster the perfect fit!

Justin has had Cerebral Palsy his whole life. Growing up, his parents enrolled him in equine therapy, not only to help his motor skills, but to give him an emotional outlet as well. From this, Justin learned he likes his feet to be “firmly planted on the ground,” so horseback riding most likely isn’t in his future!

His true outlet, and his career path, came when he discovered broadcasting, and with it a whole new set of aspirations. Justin loves sports but finds himself physically unable to participate in his favorites. Sports broadcasting is the perfect fit for his outspoken personality. With broadcasting, Justin can react in real time to events, which is a very natural feeling for him.

He noted, “this industry is competitive,” and there are some aspects of his CP that might limit the opportunities he can grab. But this hasn’t stopped him in the slightest. While he can’t change the way things work around him, Justin makes them work for him.

In addition to broadcasting, Judaism has played a tremendous role in Justin’s life. Justin shared that three generations of Borses have sung at his Synagogue, himself included. He describes it as “up on the Bema, yakking, hopefully making some normal sounds!”

Perhaps unsurprisingly, his Bar Mitzvah was a huge event, with over 300 people and lots of partying, fun and good times! He has had the same Rabbi since he was 2 years old, whom he still texts just to check in or say Shana Tova! These types of relationships and the resulting sense of community are important to Justin. Everyone at his synagogue is like family to him.

Justin’s family and friends are his biggest supporters. Justin says his family is highly emotional, and they have a running bet for every ceremony or event. They put $20 down on who is going to cry first!

Justin’s grandfather is more than just emotional. He’s also a psychiatrist, causing Justin to joke “sometimes, I even get free sessions… even when I don’t want them.” Joking aside, Justin’s disability has made him a huge proponent of therapy and talking, understanding that sometimes everyone just needs to let things out.

Justin’s best friends have come from Jewish connections! These friends have known him for a long time, and he doesn’t need to explain his disability or justify his belonging in their friend group. Rather, Justin can just exist with them, and that’s the most valuable type of connection.

Justin has valuable input on the importance of connections and community, as well as a deep knowledge of and passion for sports, and would love to share these with your community or organization! If you are interested in having Justin speak at your organization, please contact Jake Stimell at [email protected]

Next: ADA @31: A Focus on the Future – Disabled Directors Leading the Way