Hawaii Sen. Mazie Hirono Recognized for Leadership as an Immigrant and as a Person with a Disability 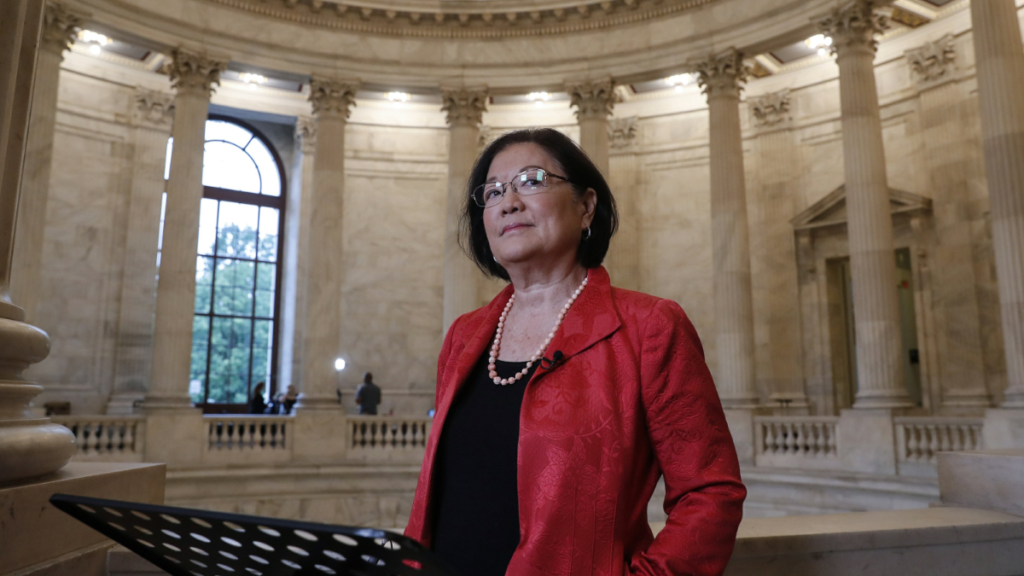 Washington, D.C., May 23 – U.S. Senator Mazie Hirono (D-HI) has been working in government since the 1980’s, striving tirelessly to make a difference and has made great advances on many fronts. She is the first Asian American woman elected to the Senate, the first woman elected to the Senate from Hawaii, and the first Buddhist senator. As of May 2017, Hirono is also a woman with a disability serving in the U.S. Senate.

During an x-ray before minor eye surgery, it was discovered that Sen. Hirono had stage 4 kidney cancer. Since then, she has had to undergo surgery to remove her right kidney and a rib, as well as extensive cancer treatment. Hirono considers herself lucky that she was able to get early intervention and that she had health insurance at the time of her diagnosis. Thus, she is a strong supporter of healthcare reform and specifically, Medicare for All. However, her support for healthcare reform started long before her diagnosis.

Sen. Hirono immigrated to the United States from Fukushima, Japan at the age of seven. Thus, she is no stranger to immigration-related issues – for which she also advocates – nor is she a stranger to problems with healthcare access, as she and her mother struggled to afford it. Back in Japan, she lost a sister to pneumonia when she was only two because she could not get care. In the United States, it was difficult for Sen. Hirono and her mother to afford food and rent as it was, and Hirono often feared that her mother would not recover if she got sick and could not afford treatment. To help her mother earn money, she delivered newspapers and worked as a cashier in her schools’ cafeterias.

In 1959, Sen. Hirono became a naturalized U.S. citizen around the same time that Hawaii formally joined the United States as the 50th state. She would go on to earn a B.A. in Psychology from the University of Hawaii at Mānoa in 1970 and became a lawyer thanks to Georgetown Law School in 1978.

Shortly after graduating law school, Sen. Hirono started her political career. She was elected to the Hawaii House of Representatives (12th House District) in 1980 and served from 1981-1994. In the later years, she served as the Chair of the Consumer Protection and Commerce Committee. From 1994-2002, Sen. Hirono served as the Lieutenant Governor of Hawaii. Finally, she made her way to Washington, D.C., after getting elected to the U.S. House of Representatives and serving from 2007-2013.

Of note are the 537,908 working-age Asian Americans with disabilities. In the economic expansion prior to the COVID-19 pandemic, they had one of the highest employment rates of any intersectional element of disability community with fully 43.1 percent having jobs. By comparison, 76 percent of Asian Americans without disabilities have jobs.

Sen. Hirono is also notable for being the only immigrant currently serving in the U.S. Senate. Census Bureau data shows that there are more than 44 million immigrants living in the United States and out of that number, up to 6 million are probably living with a disability. As such, Sen. Hirono is an important role model for those who have chosen to become American citizens.

In 2012, then-Rep. Hirono made the choice to launch her campaign to run for the open Senate seat in Hawaii. After a well fought Democratic primary, she would go on to win her senate race with a 62.6 percent victory against her Republican opponent, former Republican Hawaii Gov. Linda Lingle.

Her leadership in the Senate has included several key committee assignments and caucuses, including but not limited to the Committee on Small Businesses and Entrepreneurship, the Congressional NextGen 9-1-1 Caucus, and the Expand Social Security Caucus. She also continues to speak out about her beliefs for healthcare, as well as her support for women’s rights, veterans, the LGBTQ+ community, consumer rights, environmental protections, and immigrants.

In recent years, she has taken a strong stance against sexual misconduct and she defended the Affordable Care Act by giving a speech about her experience with cancer and healthcare that was so powerful that it was seen as instrumental in preventing its repeal. Sen. Hirono has come a long way since her political career began and she is an incredible force for advancing the rights of many, including people with disabilities.

Sen. Hirono’s life change profoundly when she received a cancer diagnosis after a routine screening in 2017. Anyone, at any time, can become a member of the disability community due to accident, illness, or injury.

In direct response to recent events, Sen. Hirono has championed the COVID-19 Hate Crimes Act and secured bipartisan support for this crucial bill against hate crimes. On Thursday, May 20, 2021, Sen. Hirono’s most recent piece of legislation was signed into law by President Biden.

Moving the nation to become more equitable for underrepresented communities and dismantling systems that create marginalization requires a transformation in culture, practice and the economy. It requires the courage and commitment of every American, the adoption of policies to end disparities, as well as a culture that embraces diverse stories that reflect the full Asian American and Pacific Islander experience and the intersectionality of the disability community.

Sen. Hirono’s life, experience, and leadership is one such story.

Stephanie Santo has a Master’s Degree in counseling for mental health and wellness from NYU. She feels a responsibility to communicate with her clients and is saddened by the lack of health care access many people have in the Deaf community.

Next: Sen. Tammy Duckworth Serves as Role Model for Many