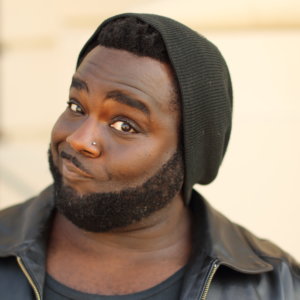 Harold Foxx is an American theatre, film, television actor, comedian, and writer who happens to be Deaf. He launched “The Harold Foxx Show”, an online entertainment brand featuring comedy skits, which has gained over 80,000 followers on various social media platforms.

He is known for his stand-up comedy, which he has performed across the nation in D.C., Maryland, St. Louis, Los Angeles, Jamaica, the National Association of the Deaf, Laugh Factory, Flappers Comedy Club and most notably at Busboys & Poets. Harold has been involved in numerous film, television and stage productions, including “The Actor Whisperer,” “For my Woman,” “Audism Unveiled,” Deaf West Theatre and Pasadena Playhouse’s “Our Town,” Playwrights Horizons’ “I Was Most Alive With You” (NYC Off Broadway Production), and National Theatre of the Deaf 2020 Online Playwrights Convening. Foxx also wrote, produced, and directed “Smell The Nature,” a mockumentary comedy for the 2021 Easterseals Disability Film Challenge. Currently, Harold is training with the Groundlings, an improvisation and sketch comedy theatre & school based in Los Angeles.

Previous: Ambassador of JOY Barry Shore Featured in Series on Jews With Disabilities, “What Do You Pray For?”