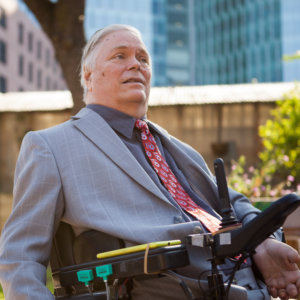 Lex Frieden is Professor of Health Informatics and Professor of Rehabilitation at The University of Texas Health Science Center at Houston (UTHealth) and he is adjunct Professor of Physical Medicine and Rehabilitation at Baylor College of Medicine. Mr. Frieden also directs the ILRU – Independent Living Research Utilization Program at TIRR Memorial Hermann in Houston. ILRU is a research, training and technical assistance program on independent living for people with disabilities and older adults.

A graduate of Tulsa University, Mr. Frieden has been honored as a Distinguished Alumnus. He holds a master’s degree in social psychology from the University of Houston where he completed doctoral requirements in rehabilitation psychology, and he has been awarded an honorary doctorate in law (LL.D.) by the National University of Ireland. He has been the University of Texas Chancellors Fellow on Disability, and he has received two Presidential Citations for his work in the field of disability. He was awarded the 2017 Fries Prize for Human Improvement.

Mr. Frieden is the author of more than 100 published contributions to the literature. He has given more than 1,000 lectures and presentations at events throughout the US and internationally. He is currently leading a national research study to evaluate the impact of the ADA and to identify population group disparities related to employment, transportation, housing and community living.