Los Angeles, California, June 10 – A coalition of more than 40 Jewish organizations, led by the disability nonprofit RespectAbility, is pleased to announce a new Jewish Disability Access & Inclusion Training Series. This seven-part series, which will run virtually from June 23 through August 11 is a collective offering to the Jewish world so Jewish organizations can welcome, respect and include people with disabilities from all backgrounds in the important work that they do.

Jewish organizations partnering in the series include the Jewish Federations of North America (JFNA), the Union for Reform Judaism (URJ), The United Synagogue of Conservative Judaism (USCJ), Reconstructing Judaism, Yeshivat Chovevei Torah, Jewish Women International (JWI) and dozens of others. Eric Fingerhut, President and CEO of JFNA said, “We will have reached a major milestone in Jewish community building when we no longer need to identify ways to remove barriers to participation.” 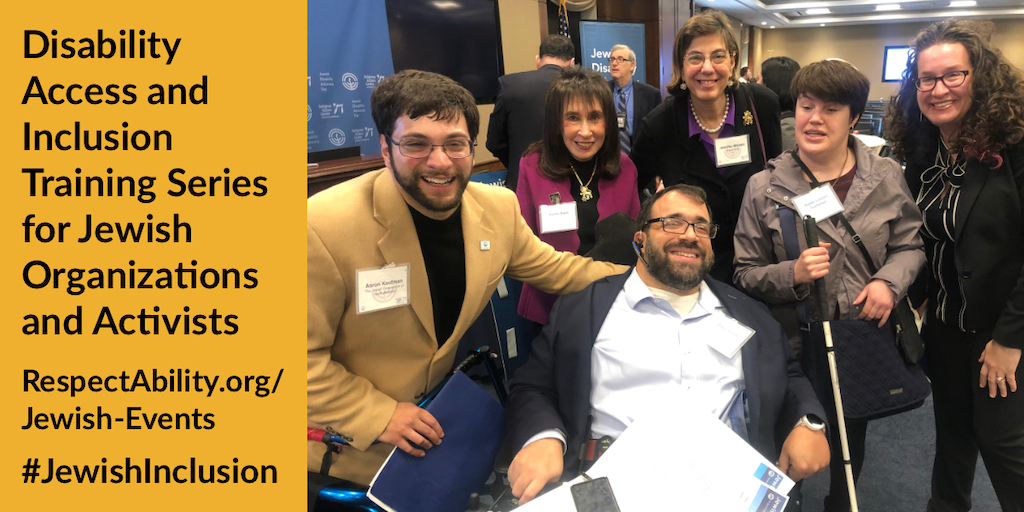 This July is the 30th Anniversary of the Americans with Disabilities Act. However, while the desire to be inclusive may exist, too many organizations – including Jewish nonprofits – do not yet know how to do so. In fact, in early 2019, RespectAbility published Disability in Philanthropy and Nonprofits, which demonstrated that 75 percent of the social sector wants to include people with disabilities. Similarly, a landmark study by RespectAbility of more than 4000 Jewish respondents in 2018 found that more than 90 percent who responded indicated that this was a priority for them. Yet, RespectAbility’s nonprofit survey showed that this inclusion is practiced by less than one-third of nonprofit organizations. The studies also showed that while the will was there, the knowledge was not. Hence, this free new series will fill that gap.

According to the U.S. Census, fully 1-in-5 people in America has a physical, sensory, cognitive, mental health or other disability. During the COVID-19 pandemic, health issues have increased, as have their urgency.

Over the years, with great intentions, the push for diversity, equity, access and inclusion in Jewish organizations has led to improvements in access and inclusion for people with disabilities. However, there is still a long way to go as time and time again, organizations unintentionally exclude people with disabilities in their events, programming, resources, websites, grant applications, volunteer recruitment and hiring practices. This webinar series can change all of that and bring transformational changes across the English-speaking world.

The entire series will be offered online and for free. People have two options to watch live: via Zoom, where they can ask questions live, or via Facebook Live. In addition, a recorded version, along with the PowerPoints and transcripts, will be available on www.respectability.org/jewish-events in perpetuity. All sessions will include American Sign Language (ASL) interpreters and live captioning. This series will offer a broad and comprehensive set of considerations and tools, on topics including:

“RespectAbility is an outgrowth of the Jewish Funders Network Disability Inclusion Committee. It was born in Jewish values, that people with disabilities could participate fully and share their talent with the world, just like everyone else,” said Jennifer Laszlo Mizrahi, CEO of RespectAbility, who herself is dyslexic. “I am very excited that the Jewish world will now have the tools to do just that.”

Matan Koch, the director of RespectAbility California and Jewish Leadership, who is also a wheelchair user, added, “For decades I have been privileged to work one-on-one with Jewish organizations to help them realize their vision of full inclusion. I’m tremendously excited that, with the generosity of these funders and the reach of RespectAbility and our partners, we will be able to bring this training to the entire Jewish world. We hope this opportunity will be embraced by Jews with disabilities and their allies who want to lead the way for Jewish organizations.”

The training series follows the recent launch of Project Moses, a new leadership program that currently is recruiting talented, civic-minded Jews who have disabilities to join a leadership cohort in the Los Angeles Jewish community.

The series will be managed by RespectAbility’s Jewish team, which, in addition to Mrs. Mizrahi and Mr. Koch, includes Vice President of Communications, Lauren Appelbaum, a graduate of the Jewish Theological Seminary, Director of Community Outreach and Impact Debbie Fink, a former Hillel director, Communications Associate Eric Ascher, and Jewish Leadership Associate Joshua Steinberg. The Board co-chairs for RespectAbility’s Jewish work include Shelley Richman Cohen, co-founder of RespectAbility, and Vivian Bass. Both are longtime leaders in the Jewish community and each will moderate one of the webinars. Additional board members involved with RespectAbility’s Jewish work include Linda L. Burger, Judith Creed, Heidi Krizer Daroff, Ila Eckhoff, Gabrielle Einstein-Sim, Donna Meltzer, Neil Jacobson and Delbert A. Whetter.

There is no cost to participate, but in order to be fully included in the webinar, participants are encouraged to register at www.respectability.org/jewish-events. All seven webinars will include ASL interpreters and be live captioning.

Next: Virginia and the USDA Enable Safe, Online Food Access for SNAP Beneficiaries