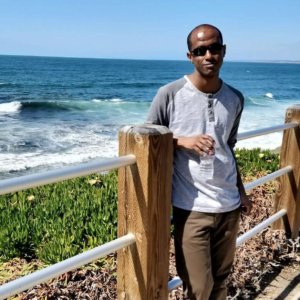 Nebiyu Dingetu started to seriously consider a career in entertainment for the first time when he was in eighth grade after submitting one of his video production class projects to a local film festival and winning first place out of his school district. He had substantially better eyesight back then so he wasn’t too aware of what would lie ahead. But he was requesting large-print texts for his required class readings at that time and was bordering on qualifying for the “legally blind” label so he knew he would most likely have some unique challenges if he chose to pursue a career in the visual arts.

When he entered his high school years, his love for filmmaking was intensifying at a rapid rate. At the same time, his vision continued to slowly deteriorate as a result of his Congenital Glaucoma and Corneal Edema. By junior year, he was researching affordable film schools in Los Angeles and at the same time learning braille just in case he lost his vision completely. A few years later, he was at CSU Northridge attending his freshman year of college and declared Cinema and Television Arts as his major. After exploring the different classes in the program and carefully assessing his options in the entertainment industry, he found himself deeply falling in love with the craft of editing.

Dingetu was really terrified at times by the idea of pursuing employment as an editor while having a severe vision impairment. But he always was able to balance that fear by taking some practical steps toward his goals and by having a bit of blind faith that everything was going to be okay. After graduating from CSUN, he landed a full-time position at The Hollywood Reporter’s video department as one of three in-house video editors.

His time at The Hollywood Reporter, which lasted for almost four years until his unemployment as a result of the COVID-19 pandemic, consisted of some of his most meaningful life experiences. He was very fortunate to work with incredibly supportive colleagues and grew so much as an editor and as a person. In addition to editing, he also started developing his producing skills by creating promotional videos for his friend’s nonprofit organization whose mission is to provide health and wellness opportunities for the blind and low vision community. Using his skills to create something that was personal to him has been a very meaningful experience.

Figuring out how to live a happy life in a world that is not designed for people with vision impairment, or other disabilities, has been a challenging but also a really rewarding journey. Even though he still has a lot of learning and growing to do, he was able to gain some insights through his trials and errors that is allowing me to live a fulfilling life while pursuing a meaningful career. His long-term goals include writing and producing movies and TV shows that will entertain but also educate and empower audiences. In the meantime, he plans to pursue freelance editing and producing opportunities while working on his personal documentary projects. He feels a sense of responsibility to share his unique experiences, as well as the experiences of those around him who have overcome even bigger challenges, through the power of creative storytelling and he plans to spend the rest of his life doing just that!