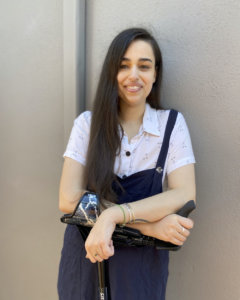 Mimi Newman spent several of her teenage years in and out of hospital, which led her to feel like she didn’t have a place in the world. When doctors told her to “make her dreams smaller,” she almost broke from the weight of that statement. Newman is an Annenberg Fellow from the 2020 MFA Class of the John Wells Division of Writing for Film and Television from the University of Southern California’s School of Cinematic Arts. So much for small dreams…

Constantly underestimated by doctors, Newman learned to cope by amassing empathy in buckets and a strong ability listen, both of which lead her to build characters with deep emotional landscapes. Her characters’ lives often are thrown out of control and their stories help them find hope within the madness. Newman holds a diploma from London’s Central School of Speech and Drama and her play, Explosion of a Memory, was performed in their black box theater. Her feature script, Beside the Seaside, was a quarterfinalist in 2020 BlueCat Screenplay Competition and her pilot, Chronic Connections is a semi-finalist for WeScreenplay Diverse Voices. She is a Londoner through and through and kindly begs you not ask if her if she’s Australian —the hybridization can only be attributed to her Texan wife.