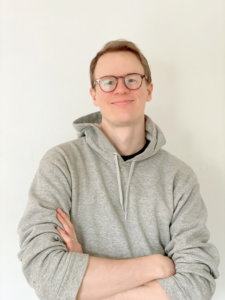 Andrew Fisher is a writer and stand-up comedian. A Stand-Up NBC finalist, he has been expanding his audiences by performing at colleges and universities across the country. As far as he can tell, being a deaf comedian is no different from being a hearing one. He writes jokes, he travels, and he sometimes even has hecklers — or so he’s told.

In addition to writing for the Chris Gethard Presents show, Fisher has developed and written a webseries entitled (un)Settled. He also has written and produced the comedic short film Plan Z, in which a couple who slips up has to decide: would they want to keep this theoretical pregnancy, or should they go find Plan B? Also, it takes place in a post-apocalyptic world full of zombies and stuff.