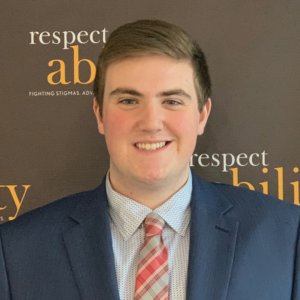 Liam Itgen was a Nonprofit Management Apprentice in RespectAbility’s National Leadership Program for Spring 2020. RespectAbility is a nonprofit organization fighting stigmas and advancing opportunities so that people with disabilities can fully participate in all aspects of community.

Itgen, originally from Long Island, New York, is a junior at Temple University, where he is majoring in Political Science. At Temple, Itgen is a member of the Model United Nations club and has participated in several bands where he plays the tuba. During several of his classes, the faculty introduced The Washington Center program, which provides immersive internships and academic seminars to students from hundreds of colleges and universities and young professionals from across the U.S. and more than 25 countries. The program was of great interest, and he got into the program with a position as a Apprentice at RespectAbility.

He first became interested in advocacy for those with disabilities after working at Nassau-Suffolk Services for Autism in the summer of 2019. Itgen worked as a Direct Support Professional in the Day Habilitation Program at NSSA. Here, he worked with adults with autism ages 22-30. Through this work, he developed an interest in advocacy for those with autism and other developmental disabilities.

After he completes his undergraduate degree, Itgen would like to attend St. John’s Law School in Queens. There, he would like to pursue a law degree, which he would use to either advocate for those who can legally receive services but do not, or work as an entertainment lawyer and make sure musical artists are compensated fairly for their creative output. He believes strongly in the rights of all people, regardless of ability, and stands by the notion that “injustice anywhere is a threat to justice everywhere.”

Besides his passion for helping others, Itgen has spent a large part of his life working at his father’s ice cream parlor, Itgen’s. The family business has left him with skills that would most likely only be useful in Willy Wonka’s chocolate factory, like making chocolate rabbits.