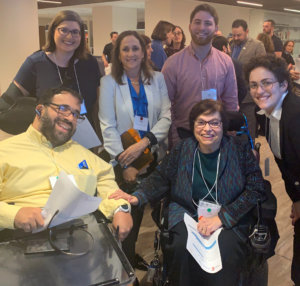 While JDAD – a day of civic education and lobbying organized by the Jewish Federations of North America and the Religious Action Center of Reform Judaism – has been in existence for 10 years, this is the first formal gathering bringing some of the advocates that come in from across the country together to collaborate. Conceived by RespectAbility, the idea of Erev JDAD was to enable JDAD attendees from around the country to be able to have more time to network with each other – sharing their community’s best practices and planting the seeds for new ones.

RespectAbility’s Director of Community Outreach and Impact Debbie Fink took the helm in organizing the event, working with cosponsors and partners from the Edlavitch DCJCC, Religious Action Center of Reform Judaism and the Jewish Federations of North America. Accessibility was paramount to ensure participation of self-advocates with a myriad of disabilities. To this end, within the DCJCC’s wheelchair-accessible space, we provided ASL interpreters, remote CART, requested read-ahead materials, scribes, and special meals. Comprising about one-third of the participants, self-advocates used wheelchairs, were Deaf (eight Gallaudet students and their Hillel director represented the Deaf community), had hearing loss, low-vision, blindness, learning disabilities, mental health disabilities, cognitive disabilities, and more. Allies constituted Jewish service providers, nonprofit staff and board members, and volunteers. In the future, we aspire for half the attendees to be self-advocates, teaching, leading and learning along with allies.

Fink noted, “It was an honor to collectively grow this idea into Erev JDAD. The pinnacle moment for me was connecting and witnessing the world’s first female rabbi who is blind – Rabbi Lauren Tuchman – lead participants in the ancient Shehechianu prayer, with Jacob Salem – the world’s first deaf Hillel director – who stood by Rabbi Tuchman’s side and interpreted the prayer in American Sign Language. The profundity herein brought a whole new, deeper, inclusive meaning to this age-old prayer of ours.”

“Erev JDAD was such a wonderful experience,” said Adam Fishbein, a self-advocate. “Our conversations were profound and full of valuable insights to share and act upon. Honestly, I’m surprised no one thought of having a gathering like this sooner since everyone’s already in town. I’m very much looking forward to future Erev JDADs.”

Matan Koch, who leads RespectAbility’s California office and its new Project Moses to train Jewish leaders with disabilities, said he was “thrilled” with the gathering. Koch, who uses a wheelchair, said, “Not in at least half a decade have this many engaged voices of Jewish leadership come together in focused dialogue around the challenges facing our Jewish disability community.”

The venerable Judy Heumann (who received an award at JDAD) led a table discussion on self-advocacy. Her participants included Gallaudet students, accompanied by two ASL interpreters. The students were thrilled to have had this learning opportunity with Heumann, author of the upcoming book, “Being Heumann: An Unrepentant Memoir of a Disability Rights Activist.” Heumann was pleased to lead and learn with them.

Beth Hoch, who runs Har Shalom’s Sherman Early Childhood Center, a Washington, D.C., area Jewish preschool that has prioritized supporting children in the community with diverse learning abilities, led the discussion on early childhood education. This focused on strengths, challenges, and a vision for inclusion. Hoch commented, “I was inspired by the colleagues and students I met who all share a vision of commitment to Jewish inclusion.”

RespectAbility Board Member Vivian Bass summed up the first-time Erev JDAD, noting: “We learned so much. The most valuable takeaway of all was learning from our peers. Everyone weighed in to the robust and candid dialogues, yielding highly impactful conversations. The evening burst with mutually respectful, enlightening engagement which set the stage for ongoing growth.”

So, everyone, mark your calendars for next year’s Erev JDAD!

Previous: Reporters who use wheelchairs break barriers to inclusion in political media by covering NH debate

Next: Volunteer of the Month: John Lawson